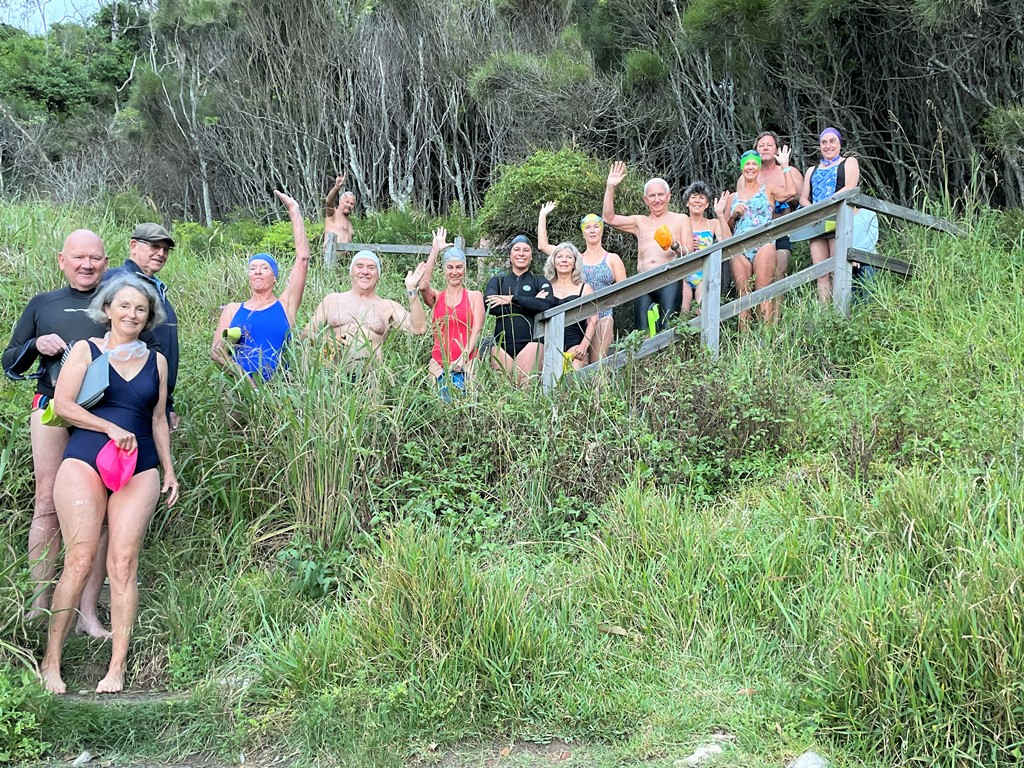 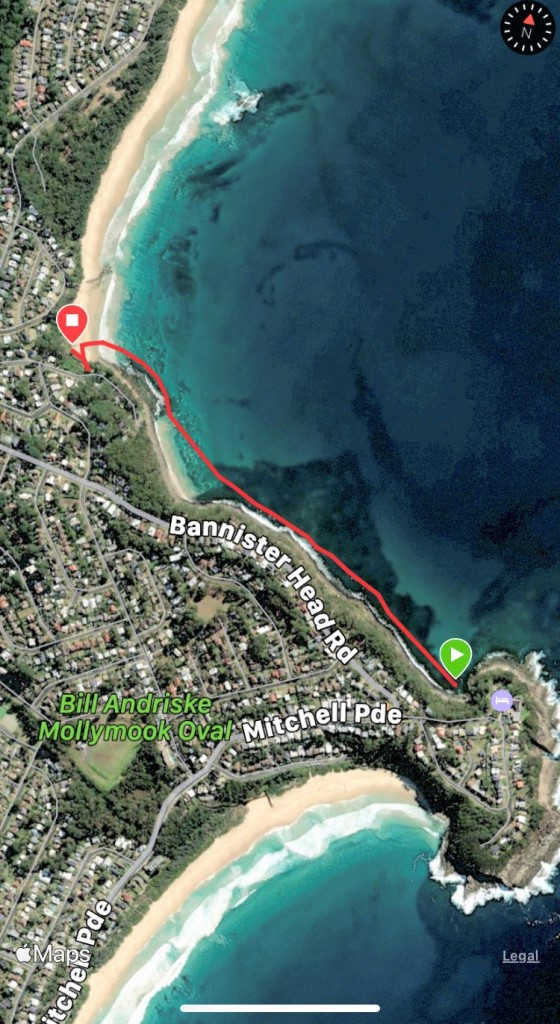 ‘Once in a Lifetime’ Swim’

Mike provides the following report: “This morning we Mollymook swimmers found ourselves swimming in another part of the ocean, in beautiful water with a beautiful coastline.  And we asked ourselves ‘how did we get here?’ Well, a few of us felt that we’d been letting the days go by, and it was time for new adventures.

So with expert logistical support (thanks to Greg and the taxi-driving team), over twenty of us gathered in the early light above Jones Beach, stopped for a quick photo op, and then stumbled over rocks and stones into the blue again, the silent water.  Our destination – the idyllic sands of South Narrawallee some 1.4 kms to the north west!

We glided and churned through the waves asking ourselves ‘how do we work this?’ not letting the water hold us down, instead noting the vibrant sea life and the water at the bottom of the ocean. For many it was a once in a lifetime experience.

Before too long, the first arrivals emerged from the shore break to be followed by a succession of companions realising that time wasn’t after us. Feeling chuffed at making it, we asked ourselves ‘What have we done’?

Later we gathered at Milton for a debrief, coffee and a Mollymook ocean swimming community catch-up.

[after David Byrne, Talking Heads ‘Once in a Lifetime’]”

Pic: The route from Jones Beach to Narrawallee. (Thanks Tim)

Jill’s comments: “Having journeyed down from Canberra for this idyllic swim, it (the swim) was so good. The water was clear and warm, the seaweed swished about, you could see lots of small fish, including small rays in the sand and I saw the larger one with blue spots. Kate also saw a huge black ray, I also spotted a small blue groper, thanks to Sue pointing it out darting through the seaweed. Greg took heaps of photos in the water, Helen was the land photographer, also some others took photos. Coffee and breaky at Milton was great. I went back to Mollymook beach and had another swim. Thank you to everyone for making me feel so welcome.”

Sue’s comments: “It was the best day !! A beautiful swim, perfect conditions, a relaxed camaraderie between the twenty strong band of swimmers, topped off by a delicious breakfast and good coffee at Flour Water Salt in Milton. We had a faithful team of supporters providing a car shuttle service, photography and words of encouragement. The water was warm, a lovely blue grouper put in a cameo appearance , and the ever faithful sting rays cheered us along. All in all, a terrific morning !! 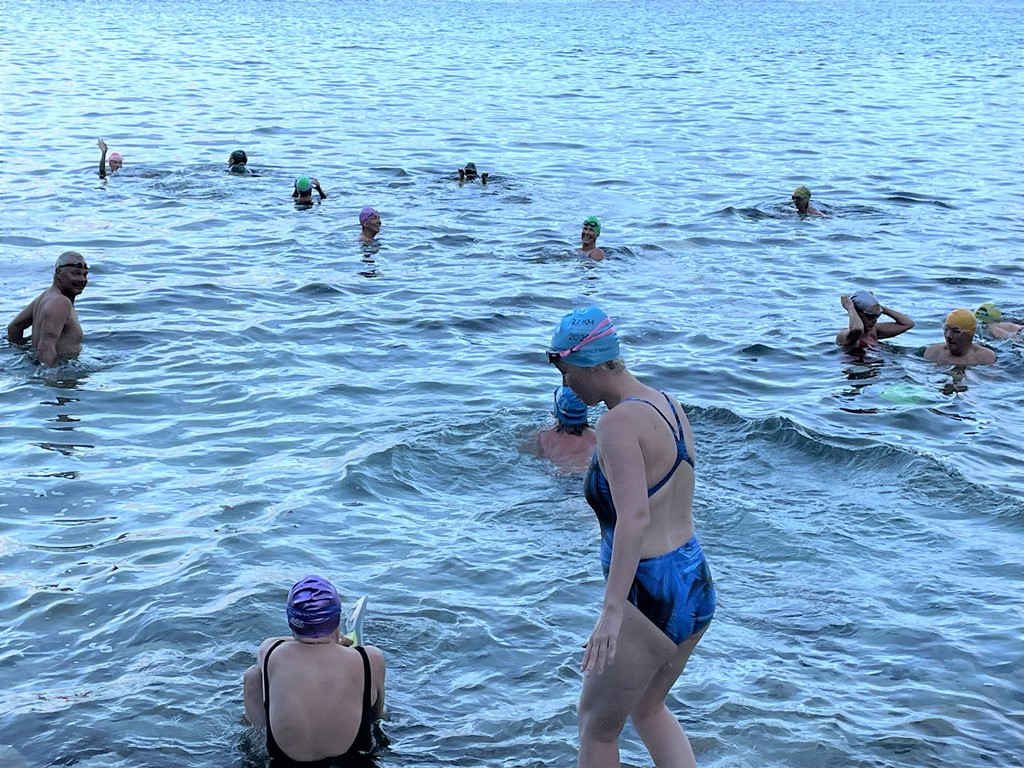 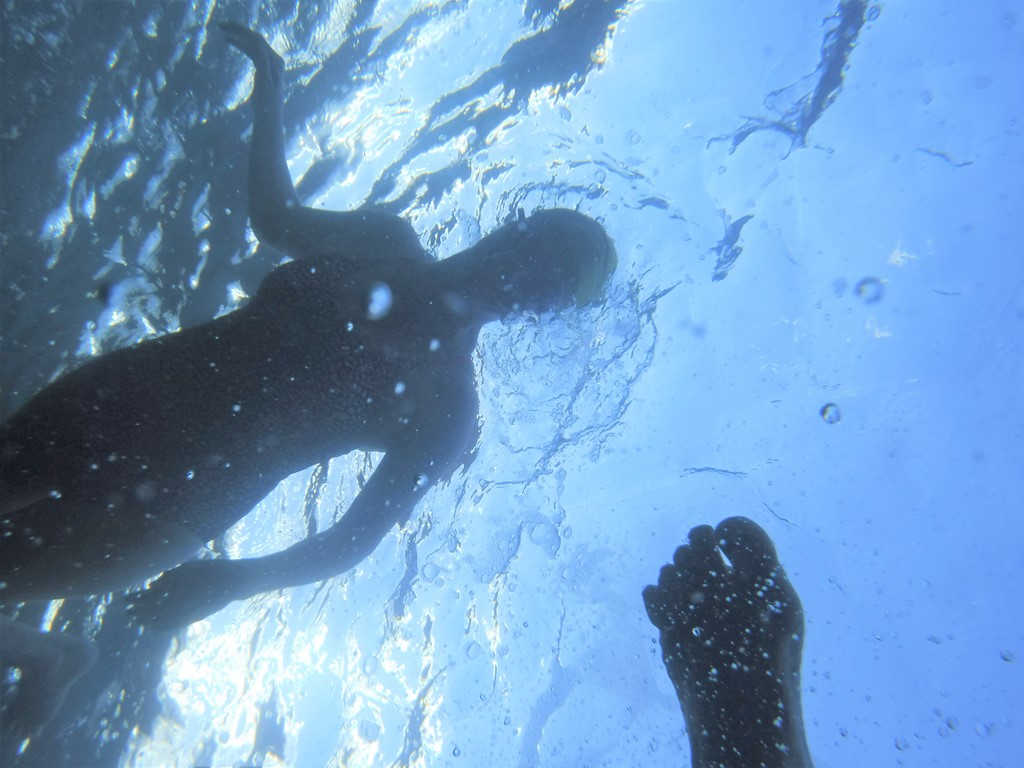 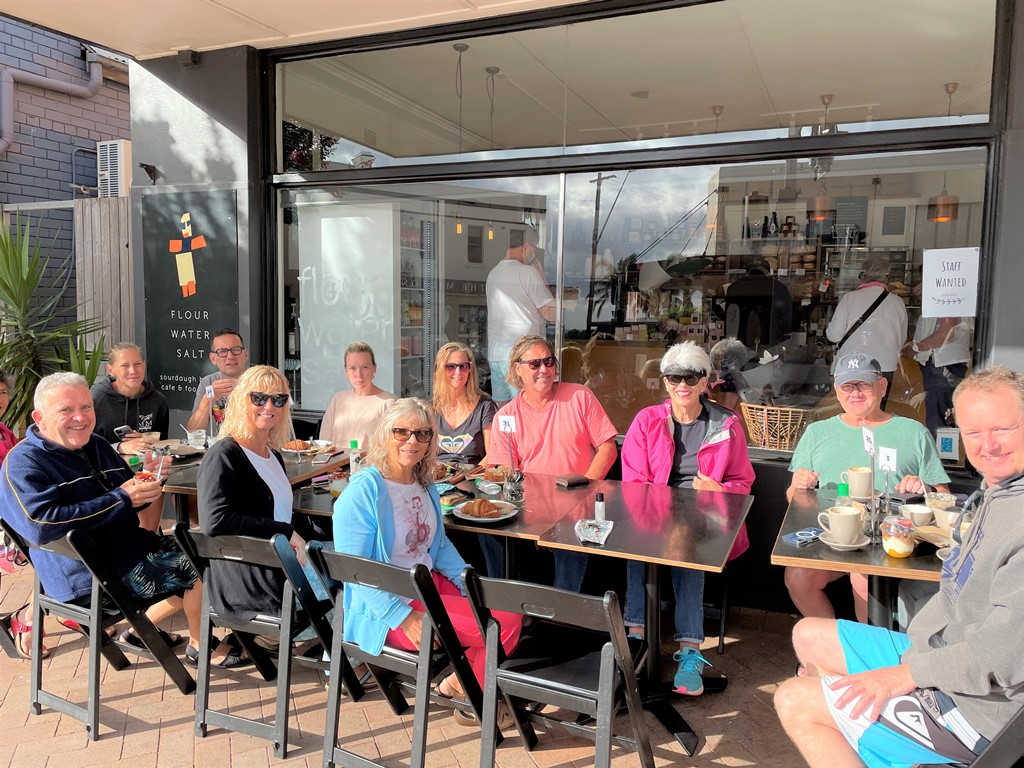 A great way to start the day

Andre sent the following email:  “I’ve updated your group listing using the info from your Mollymook Ocean Swimmers website: https://oceanswims.com/group/mollymook-ocean-swimmers/  Next time I’m coming through Mollymook I’ll be sure to pop in for a swim!” Andre.

Just a reminder, our ‘Mollymook connection’ Sami Kennedy-Sim races for a medal on Thursday February 17. She wrote “My competition date is February 17. I believe seeding is around 2:30pm and Finals at 5pm (Sydney time) but keep your eyes on the schedule via the Olympic Games Web site and 7Olympics (Channel 7). I will be travelling to Beijing on February 9th with my amazing support team. I am so proud to be in this position and I hope to do you all proud come race day – I will wave to you all on Channel 7!”