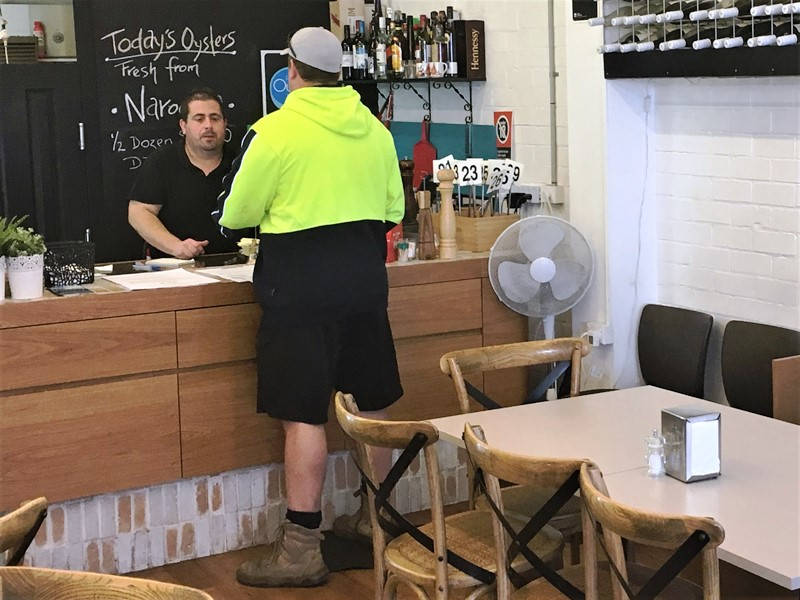 Menus choices: Burgers, fresh local South Coast oysters and schnitzels with a choice of chicken, Veal, Pork and fish. (Two generous pieces of schnitzel with your choice of home-made coleslaw or garden salad with the best thick cut chips in Ulladulla)

Alcohol: Licensed for alcohol sales or feel free to BYO

END_OF_DOCUMENT_TOKEN_TO_BE_REPLACED 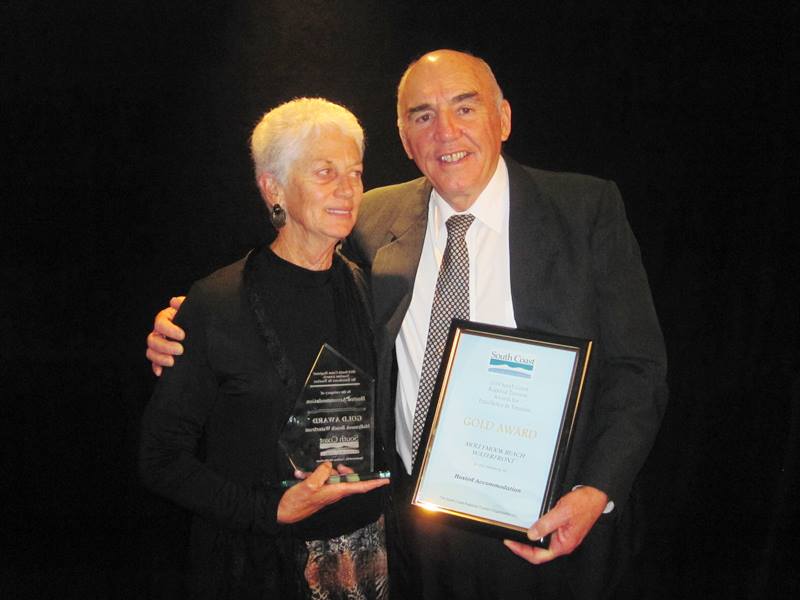 Over 300 tourism operators attended the gala evening for the presentation of the 2014 South Coast Tourism Awards held at the  Batemans Bay Soldiers’ Club, August 27.

“Walking on Water” were awarded GOLD in the category, “Adventure Tourism”

The Holiday Haven Caravan Park Burrill Lake was awarded GOLD in the category, “Tourist and Caravan Parks up to 3 1/2 star” rating” 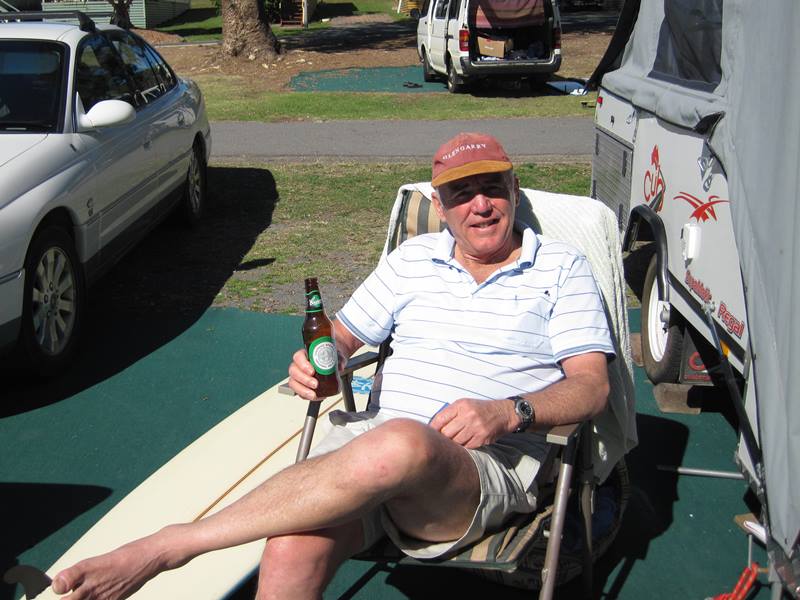 “Ken, Where have you been? Are you OK? Missing you at the beach”. ‘Carer’

From the Crescent Heads Convalescent Park

This was a lovely message to receive. To think someone was thinking of me up here among the unemployed, elderly and grey nomads.

We arrived last Monday. On Tuesday an elderly couple arrived and set up camp next us. Asked me about my BK surf board. Went on to introduce themselves, Bob and Chris Kirby from Burrill Lakes. Come Thursday a couple set up camp on the other side of us and it was Terry and Bev Conran from Burrill Lakes. Later I met the people opposite us, they were from Broulee and were heading home to attend a surf comp at Mollymook’s Golf Course Reef on the Saturday. (Small world)

He went missing during the night and after spending much time out searching for him, once found he spent the rest of his holiday in detention.

END_OF_DOCUMENT_TOKEN_TO_BE_REPLACED 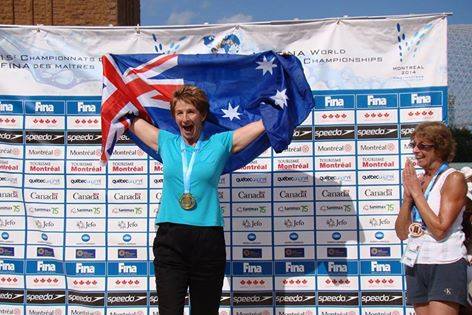 Kaye Beer, Mollymook ocean swimmer has excelled against strong competition from all over the world in her 70 to 74 age category. She also teamed up with ladies from Manly in the relay events, (240 – 279 combined age category) where they competed against ladies many years younger.

END_OF_DOCUMENT_TOKEN_TO_BE_REPLACED 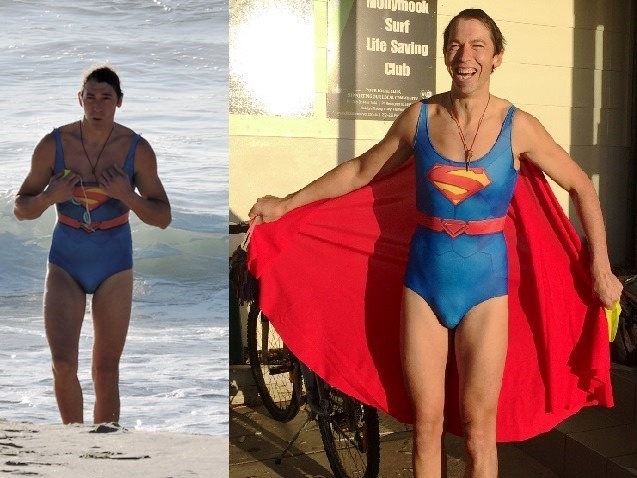 Anne- Marie was on the spot to capture this very unusual photograph emerging from the sea, a mystery man. Was it a plane? Was it a bird? Looking a little worried after realizing there were no phone booths nearby, he just stood there in front of us all and brazenly donned his cloak. There was no mistaking, ”It was Superman”!!

Local model and surf club member Lekshe Losil, modelling the latest swim wear ready to hit the market for the 2014-2015 surfing season as fashion designers step outside the square to introduce something entirely different for the men to wear this summer.

We now wait in anticipation for Cheryl to unveil a variety of swim wear designed for the ladies this summer.

“Oh no, I missed that! Is this a challenge for the other male members to turn up in their superhero outfits? I believe Cheryl is already sporting her Wonder Woman outfit”. Louise M.

“That’s terrific! That was so funny. What a good sport!. Now I cant wait for us girls to don on our superb new swim wear!!! Thanks to Cheryl”. Is

Swimmers night out at the Pool Bar.

Roving correspondent; Roscoe files this report:  After a great day at Ceto’s last week Helen requested “can we do it again with Ross & Jo and anyone else that wants to catch up” The Harvest Bar was suggested but the “carers” were going there with their work colleagues from their other job, so as not to embarrass them Bannister’ s Pool Bar was the call. Graham and Debbie were invited to make up for the big birthday event that he didn’t attend, so the evening started off with a rousing rendition of Happy Birthday to Graham and it was all downhill from there!
.
Although the principal carers were not in attendance there were sufficient deputies to ensure an almost one on one ratio! NSW Health take note. And were they needed, almost immediately the seniors started to wander off from the enclosure, (private room), and proceeded to jump around the place in the belief that they were dancing to the music. The carers soon joined in on the dance floor and kept a watchful eye on their charges in case of any falls or injuries. A couple of noted performances were Jacqui “maracas” and dancing Dougie although some believe he was only trying to get to the bathroom!
.
The only down side to the night was the Birthday boy thinking we had bought him there as a present, he not only ordered extra takeaway but shot through without paying! Ulladulla police have been notified and are investigating.
.
All in all a great night was had by all, John Louth was last seen sneaking out for a “toke “ with some stranger who gate crashed the party.
.
Images contributed by Debbie.

END_OF_DOCUMENT_TOKEN_TO_BE_REPLACED 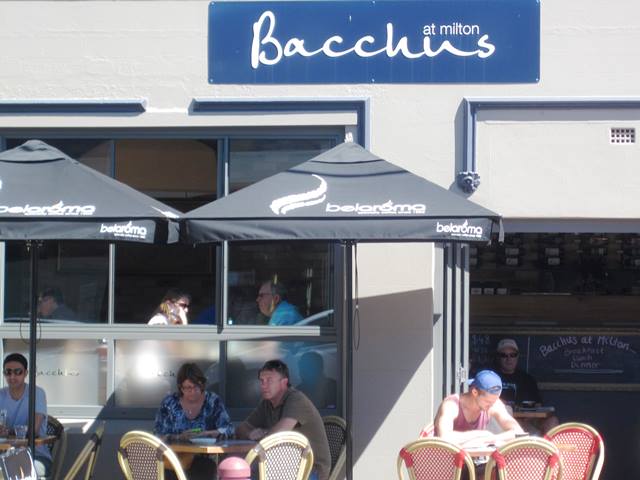 Summary: Modern Australian, see example images below. Favourites include steak served with classic butter & parmesan mash and own port jus, plus a variety of seafood dishes.