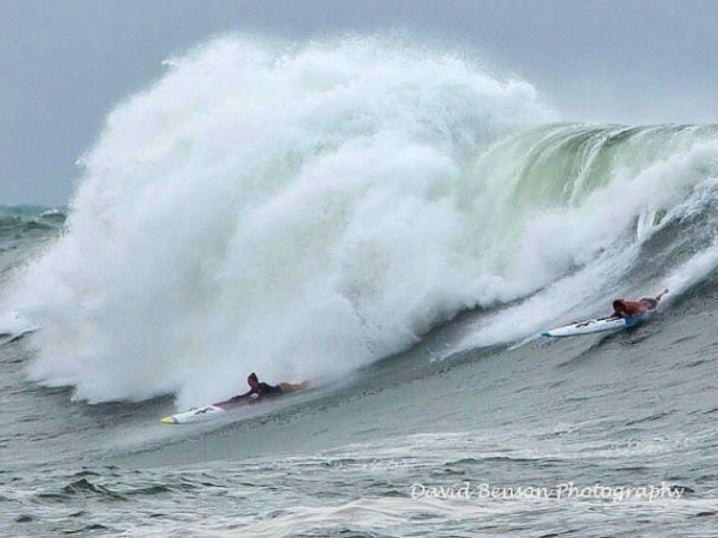 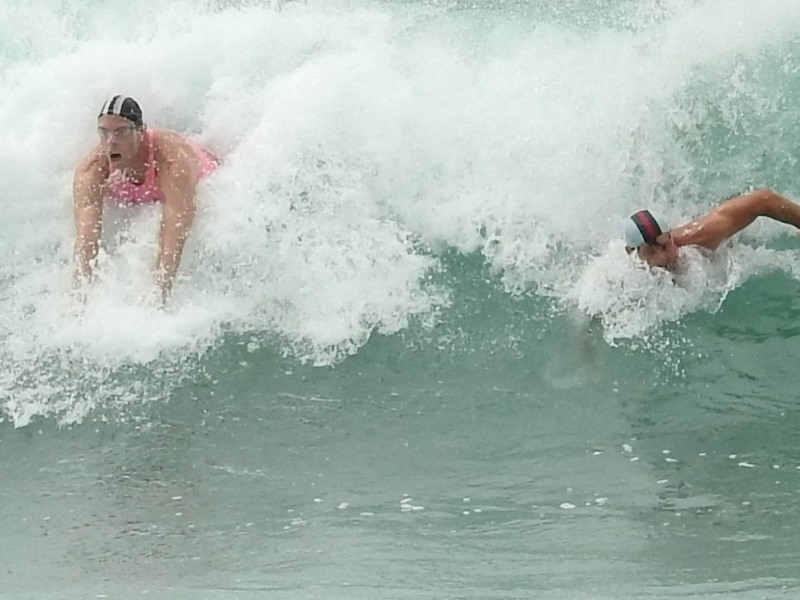 The massive surf running at the NSW Surf titles held at Swansea Belmont last week can be seen in the 1st image courtesy of David Benson. Wednesday the officials cancelled the water events and on Thursday only held selected water events as they were unable to anchor the string of swimming buoys that were constantly being smashed by the waves breaking way out beyond the swimming buoys.

Mollymook Surf Club’s Tony Ireland climbed onto this huge wave in the swim leg of the iron-man event and rode it all the way to the beach putting him in the lead which he maintained throughout the surf board leg and after being hit by a few waves in the final ski leg, ran up the beach in 4th position. 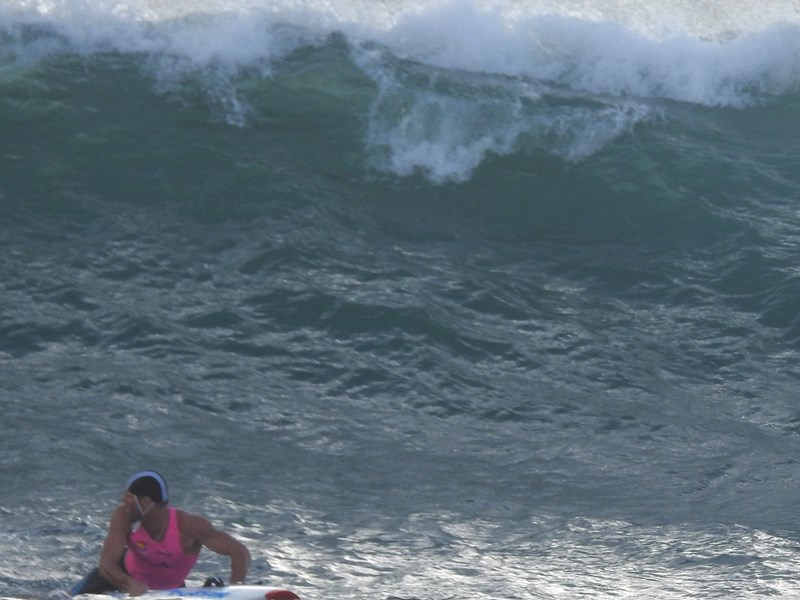 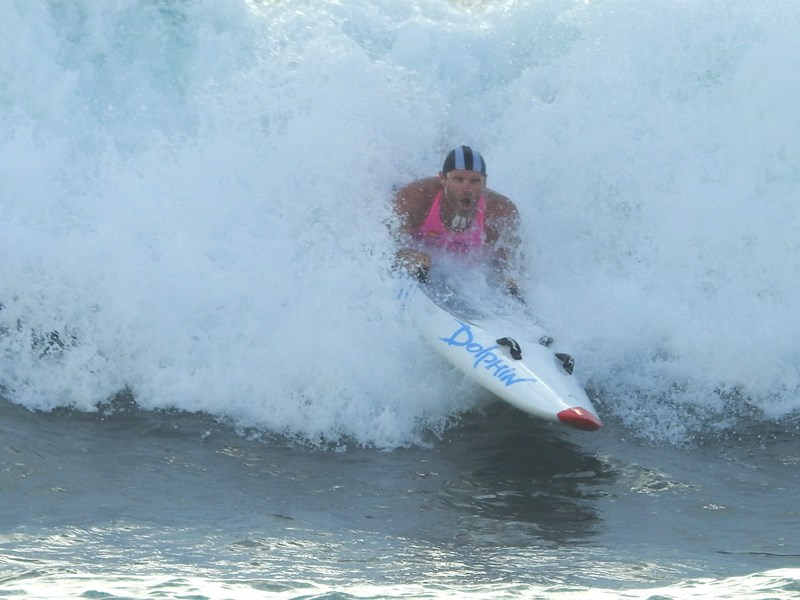 Paul Burton Mollymook Surf Club stops paddling in the board race to look up at this monster getting ready to unload upon him. To his credit he hung onto his board ‘as if his life depended on it’ finishing 6th in the final.

Lake Macquarie was the back up venue for the Masters boat races. 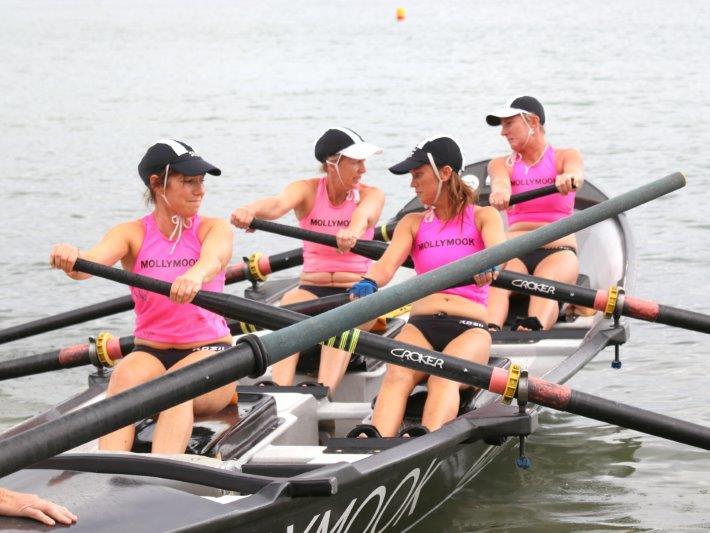 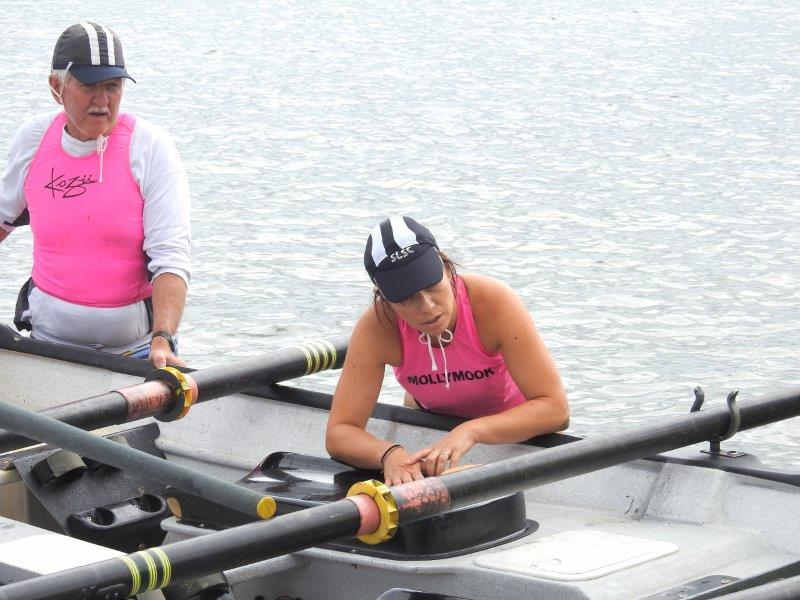 Finals finish: Moni exhausted, Simone not well. They gave it their all!

The 180 year ladies crew from Mollymook surf club rowed their hearts out to make the finals. Only in their second year of competition, they were now to face some seasoned campaigners in the final. Rod Austin commented: “Three crews they were up against in the final had been rowing together for many years sharing the spoils at previous National and State titles. They have a huge task ahead of them”.

The starters gun fired and Mollymook were neck and neck with the leaders in this star studded field, there was less than a boat length between the first four as the turned the cans for the run home. Rowing in a lake was like rowing in dead water, it was heavy going, no runners like in the ocean, just hard slog all the way. The four leading boats included Mollymook, with the 5th and 6th boats well out of contention.

About a boat length separated these four leading boats as they crossed the finish line with Terrigal 1st, Avoca 2nd, Avalon 3rd and Mollymook 4th. Disappointed not to get a medal but great encouragement for this young crew to know they can hold their own against the best and will be much better and filled with confidence for next year’s events. 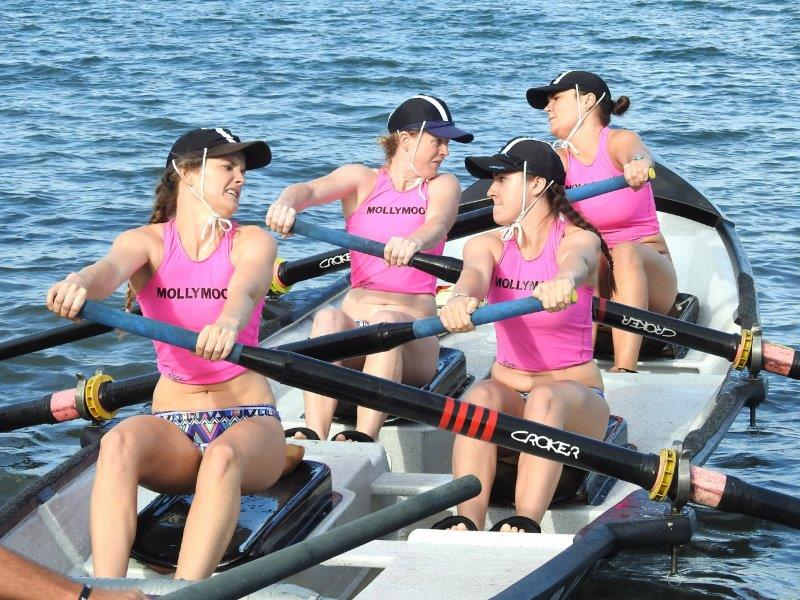 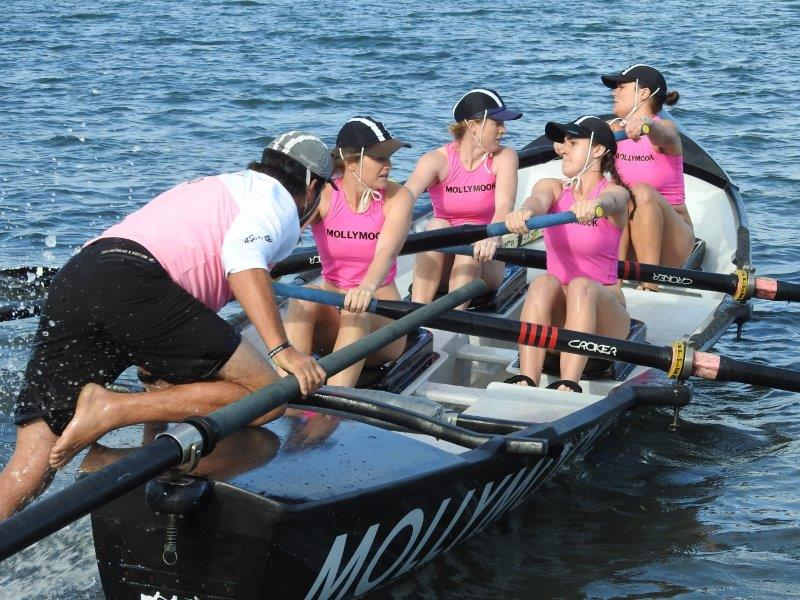 Marty climbs on board

Mollymook surf clubs ‘Squid Jigs’ contested the open, ‘A Reserve’ heats in the lake on the Saturday morning. In a large field of very competitive crews, they contested three heats to successfully make it through to the finals.

The Semi and final was held in testing conditions at Swansea beach next day on the Sunday morning. This young crew in their first year rowing together did an amazing job to advance through the semi’s. In the final they rowed brilliantly against the best in the state finishing sixth.

Mollymook excels in the Beach Events 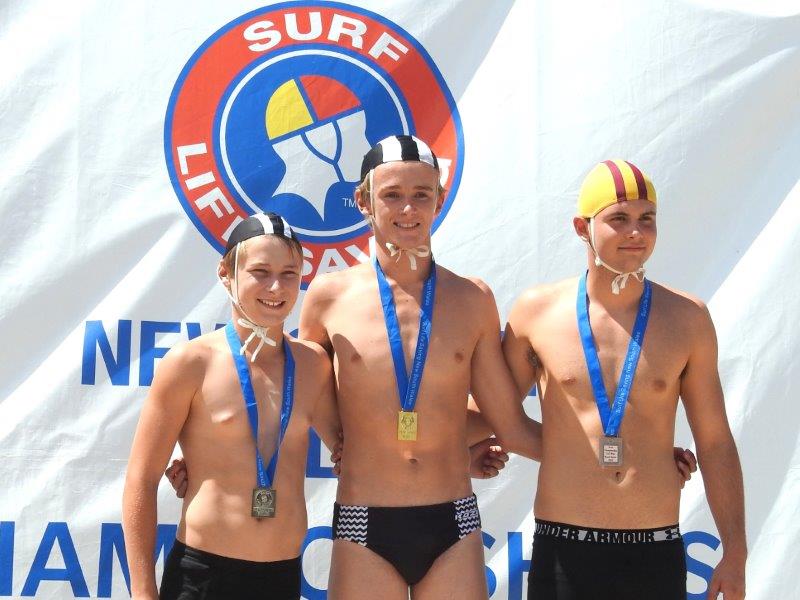 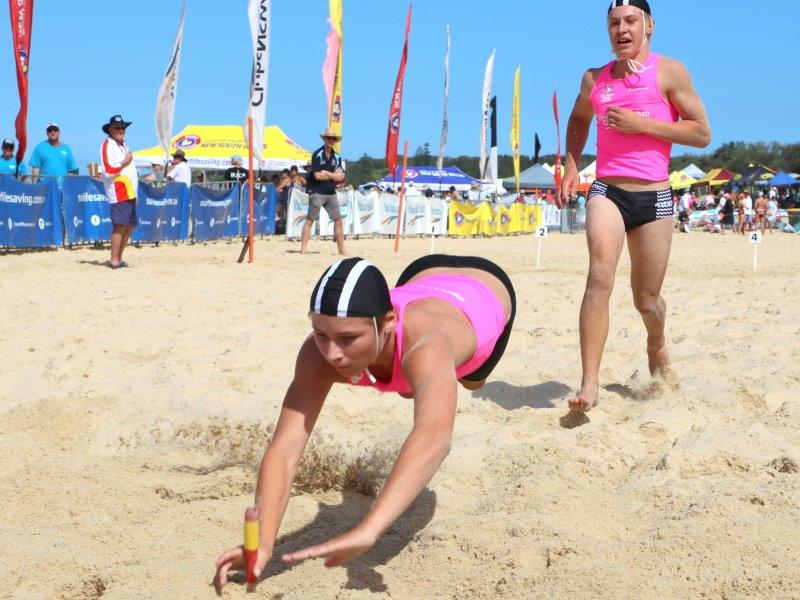 Sammy Zustovich, Gold in the Flags + silver also to Mollymook

GOLD, SILVER & BRONZE medals were the outcome from some awesome efforts by the Mollymook surf club beach athletes. Gold to Keegan Norwood in the U/15 male beach sprint & Tim Bugmann in the U/19 sprint. The U/19 and U/15 male relays teams both won gold with the U/17 team gaining silver. Gold in the U/17 flags, gold & silver in the U/15 flags and bronze in the U/19 flags and open male flags.