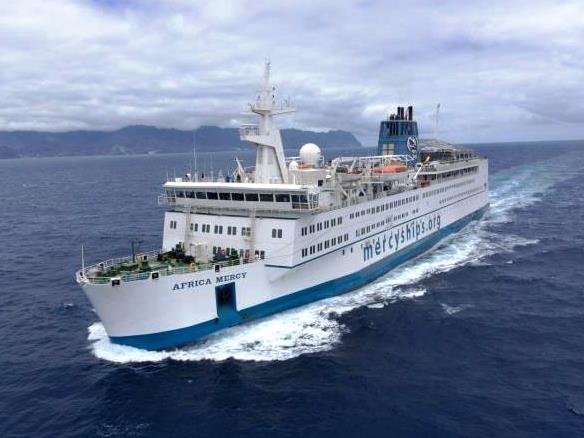 Along the coast of Africa, a long way from Australia, there is a desperate need for medical help. Here, a state-of-the-art floating hospital. On board, a team of dedicated Australians transforming lives – free of charge.

This is the basis of a story featuring on Sunday Night on Channel 7 at 7.00pm on December 14.

Filmed on location in the Republic of the Congo, the story centres on the work of the world’s largest independent hospital ship, Africa Mercy, during its 10 months docked in the Central African nation performing surgeries for conditions often not seen in the West.

“The only difference between me and the patients is the fact that I was born in Australia,” observes Rinnah Fry, a paediatric nurse from Bundaberg who has volunteered three times with Mercy Ships, the international charity that operates the Africa Mercy. Rinnah is one of the many Australian medical personnel who make up more than 450 volunteers staffing the Africa Mercy.

Also featured in this heart-wrenching, often confronting, glimpse into life in one of the poorest countries on earth is thoracic surgeon Dr A-J Collins of Tathra in New South Wales. Dr Collins has volunteered on board the Africa Mercy a number of times to carry out thoracic surgeries, which are critically needed by many people living in Africa where benign tumours are left to grow unchecked for decades. Often sufferers slowly suffocate as their airways become blocked. “Underneath they’re someone just like yourself or someone in my family and they have the same emotional needs. You couldn’t bear the idea that you’d let them go without some attempt to improve their situation,” says Dr Collins.

For more than 35 years, Mercy Ships has been pulling into the ports of the world’s poorest countries to transform the lives of more than 2.4 million people. Surgeons, nurses, dentists, health care trainers, teachers, cooks, seamen, engineers and other staff volunteer their services and pay for their own expenses to serve short-term for a few weeks to long-term in a career capacity.

One of those long-termers is Australian marine engineer Mick Dunne from Newington, NSW. Mick, his wife and their three sons joined the Africa Mercy in 2013 and plan to volunteer and live aboard the hospital ship until June 2015. Having spent 23 years in the Royal Australian Navy as a marine engineer officer, he is now responsible for the vessel’s generators and auxiliary systems, an integral role in keeping the ship and on board hospital running. “You can’t help everyone, but it makes a difference to that person,” he says.

“Mercy Ships has a mission to help nation by nation, person by person, not only with free surgeries and other medical interventions, but also with capacity building programs to enable the local people to better look after their own when we move to the next country,” says Alan Burrell, Managing Director of Mercy Ships Australia.

‘Sunday Nigh’ featuring the Africa Mercy airs at 7.00pm on December 14 on Channel 7

Mercy Ships uses hospital ships to deliver free, world-class health care services, capacity building and sustainable development to those without access in the developing world. Founded in 1978, Mercy Ships has worked in more than 50 countries providing services valued at more than $1 billion, with more than 2.5 million direct beneficiaries. Each year, more than 1,200 volunteers from over 40 nations serve with Mercy Ships. Professionals including surgeons, dentists, nurses, health care trainers, teachers, cooks, seamen, engineers, and agriculturalists donate their time and skills to the effort. Mercy Ships Australia, one of 16 international support offices, is based on the Sunshine Coast, Queensland.