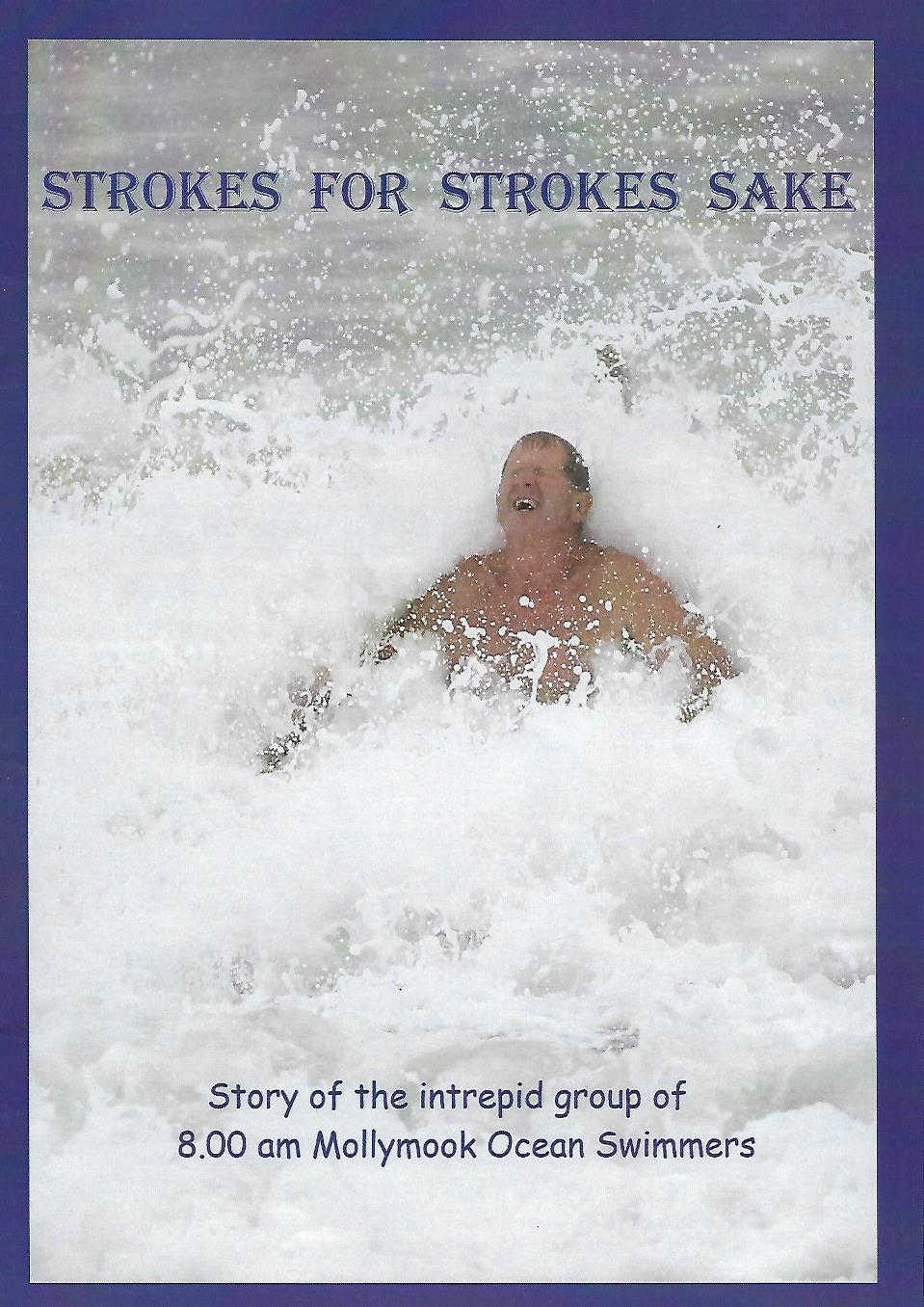 Billy R. releases his humorous epistle on the 8 am Mollymook Ocean Swimmers (Pic above features Rod Austin on the cover)

Billy (Rusho) handed out his 8 page epistle yesterday to the 8.00 am swimmers. Talking to various swimmers it was very well received. Comments such as: “Its nice to have some humour in this ongoing difficult COVID-19 period.

Regarding COVID-19, the question was raised last week – “Are we becoming Complacent” ?

As can be seen in Melbourne, COVID-19 has been spreading at an alarming rate. Let us Mollymook swimmers not become complacent in regard to the 1 1/2 metre distance rule.

There was no farewell cake for Lena 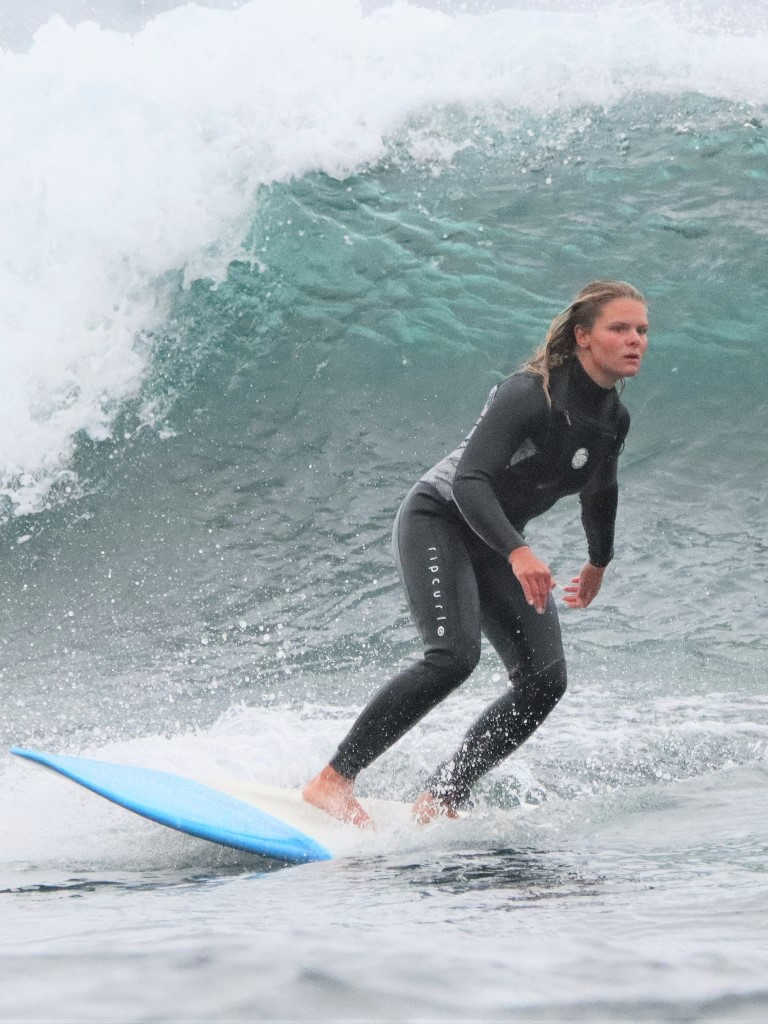 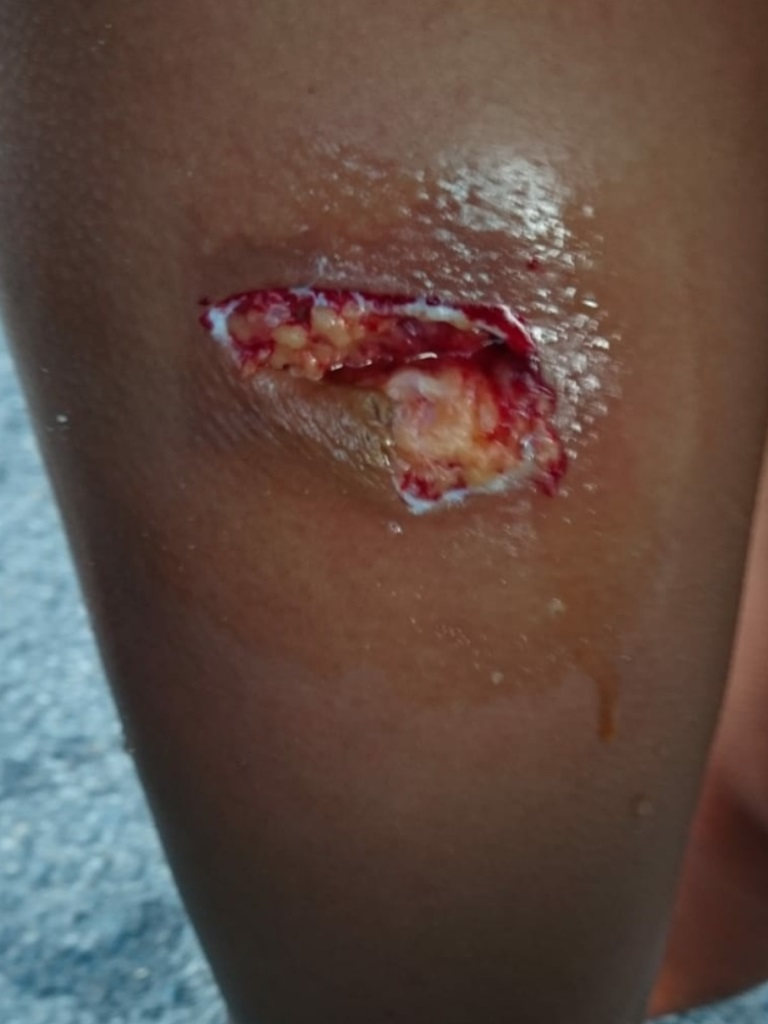 Lena was enjoying her new skill set, standing up and riding some wonderful waves until the surf board fin took a liking to her leg. It became infected, she then had a fever and her plane trip back to Germany in time to undertake her final exams last Friday did not occur, leaving her stranded here in Mollymook. 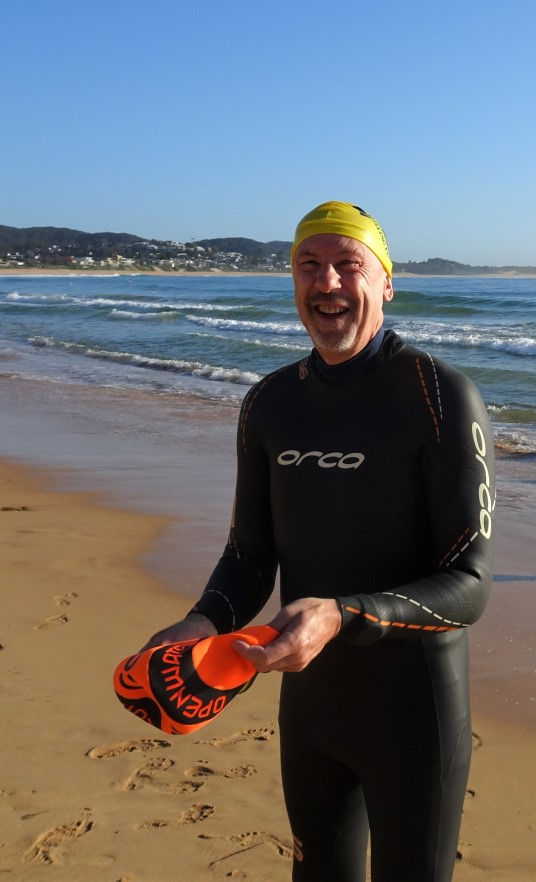 James Mabb shares the recent ‘full on’ Shark encounter by one of their female swimmers at Terrigal on July 8, 2020.

The lady swimmer wrote down her experience to share with us: “This morning there was an encounter with a shark. I was swimming to Hans’ spot – that’s where you go to the Red Buoy (it is a large maritime marker north of the point at Terrigal Bay that we swim to), over the rocks, then a bit deeper and you can see the Skillion, but without going around the corner. I normally swim looking down. I saw a shark dart from the dark straight up underneath me. You know when a dog wags its tail and the body gets in on it? It was a bit like that – I could see the tail going and it’s body getting in to it. I thought ‘golly gosh that’s not good’. The first thing I noticed was its really wide head. It was a bit like a cartoon – something small getting really big, really quickly. Out of everything that happened, that was the scariest. I won’t tell you what I was thinking at that point except that I felt a little selfish that I hadn’t got everything ‘in order’ at home. I didn’t want to look small to her/him so I quickly spread myself out – like a star but a bit more upright. It banged me fairly hard on the right hip with its head. I thought that was a good omen – it didn’t just ‘bite’ straight away. It did not have its mouth open and I couldn’t see any teeth – surely that’s also a good sign? It stayed up against me and I punched it in the head as hard as I could and I pushed it. Clearly it didn’t baulk at the stupid big starfish so I got ito a ball and it ‘nudged’ me a couple more times while it was going around me but it was still up against me. I was swinging around so I could see what its mouth was doing – it did not have it open (yippee). I pushed it and was screaming underwater (would that have put it off maybe?). It then circled, but not touching me – and left. It sounds like a long time but realistically it was about 5 to 7 seconds. It definitely was not a Grey Nurse. I know the nurses, follow them and photograph them.

This was wider, darker grey on top with a white belly. There was a definite distinction between the colour of the upper and lower body – not a gradual fading line the GN. Also the grey nurse is more a ‘warm grey’ colour with a touch of beige (We are doing art classes and it’s helpful to understand the difference between ‘warm’ and ‘cool’ colours). Also, very recently I painted the outside of my house ‘Grey Nurse Grey’- light but not clinical. Neutral but not cold. Edit: That’s supposed to make u laugh. Anyways, the encounter was unbelievably rare. Un-believe-ably rare. Was I scared? Nope. I was petrified. I felt nauseous for several hours and it took most of the day to recover. Will it ever happen again? No. No it will never ever ever happen again. The statistics of this happening once are rare. To happen again here – even rarer. To happen to me ever again…you get the picture. Don’t let this stop your enjoyment of our turtles, Gropers, Grey Nurses, jellyfish, beautiful rays. I will swim tomorrow! Will I go off by myself at dusk to the Skillion to be in a giant bait ball again? YES! Ok that was a lie. My take on this, based on shark behaviour is: s/he was smelling and touching. They don’t have hands so they do it with their heads. I truely believe it thought I was a carcass of some kind (a hot one, but nonetheless a carcass). It thought it would ‘aveago’, it made a mistake and it left. Thank you for the hugs I milked out of people this morning. (No, really – thank you. I felt awful). Tomorrow I’m expecting a muffin”.

James finished off, writing: “I am looking forward to my next swim at Mollymook, hopefully with plenty of other people down there under safe circumstances for all. As a front line worker I have kept away, at this stage”. 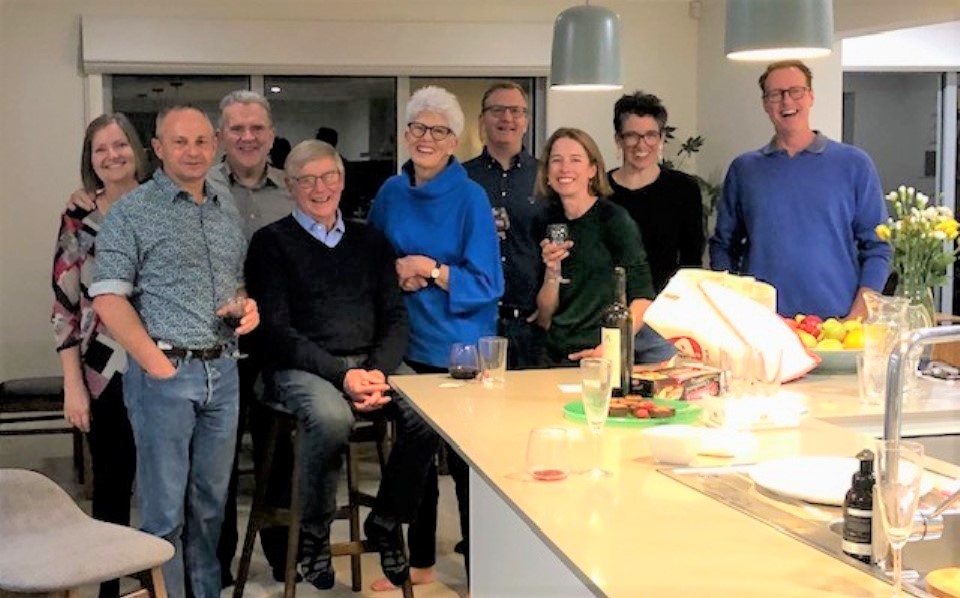 The Canberra Connection, swimmers get together. (Pic supplied by Helen) 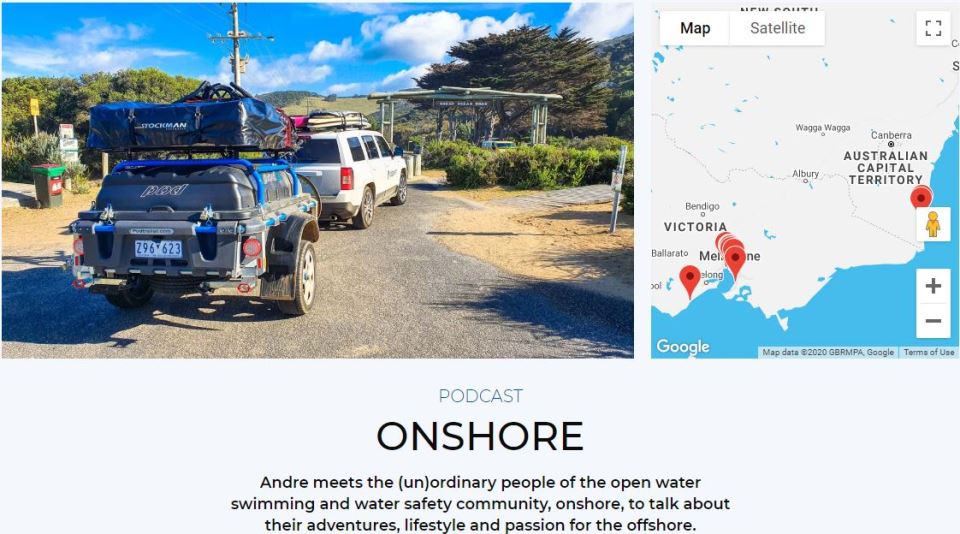 I mentioned recently that I received a phone call, followed by a text message from Andre who on his travels is doing a Podcast of local ocean swim groups. He has just spent some time in Victoria so I mentioned that it would not be wise to call in at Mollymook last week having just left Victoria.

For the Mollymook swimmers info, the following is a link to his Podcast: Andre, OceanFit Podcast

I haven’t heard if any of our Mollymook swimmers wish to be involved in his Podcast, so I just forward the above link FYI.