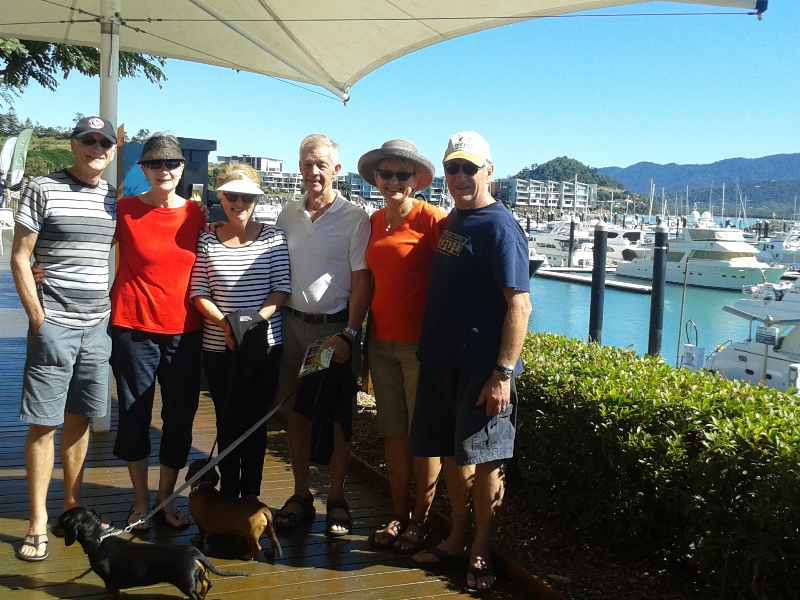 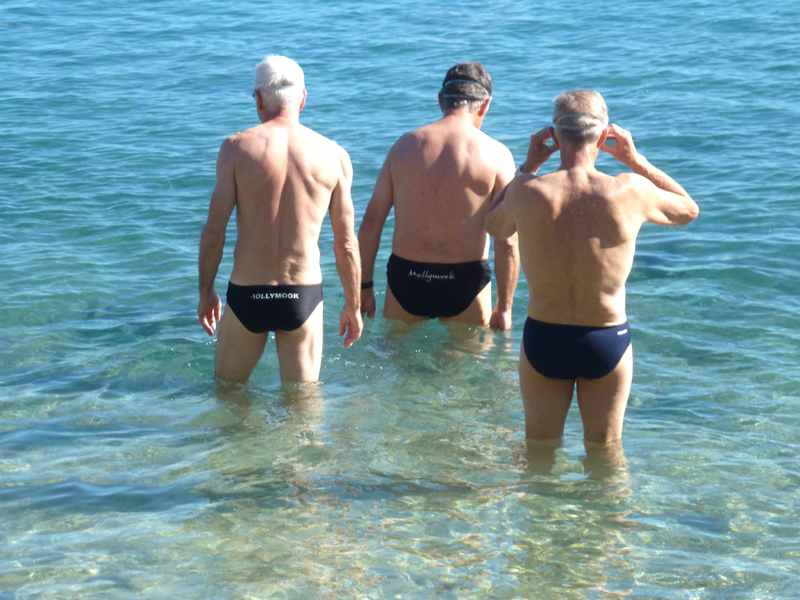 Look at all the fish

Roscoe posts this update on their trip up north at Airlie Qld. Yesterday we took an” Island Hopping”, cruise. Suzanne, Graeme, Jacqui, John, Jo and I. We set off from Port of Airlie at 07:00 am just after Mia & Bruno were picked up for “doggy day care”

Our ferry wasn’t due to leave until 08:20 am but being cautious seniors we had to be sure of a parking space close to the terminal.

So after coffee we boarded for the first port of call to Daydream Island arriving around 9:00 am. We took a walk around the island culminating in the “boys” doing an Ocean swim at a little beach called ‘lover’s cove’. Lots of fish to be seen and something a ‘bit larger’ just after we got out. Then it was time for our second coffee hit before boarding our ferry to Hamilton Island .. had to wait for the ‘green bus’ to take us to the main resort, which turned out to be a white bus with ‘green bus’ written on the destination board, very confusing for us elderly folks, traveling without the benefit of a carer.

After a swim for Suzanne and a seafood lunch (fish and chips) we boarded the ‘purple bus’, for a round the island tour. At least this white bus had ‘Purple Bus’ written in purple lettering on the side. At the end of the ride we checked out the Hamilton Island Yacht Club. What an impressive building, like a modern version of the Opera House.

Then it was some retail therapy, checked out the art galleries and some of the yachts and cruisers, with an ice cream to finish the day. A Sunset cruise back to Airlie Beach completed the seniors day out. Bobby and Lynn are expecting to join our little band tonight so we look forward to more “Adventures in Paradise”. Regards to all, from Ross, Jo, Jacqui, John, Graeme and Suzanne. 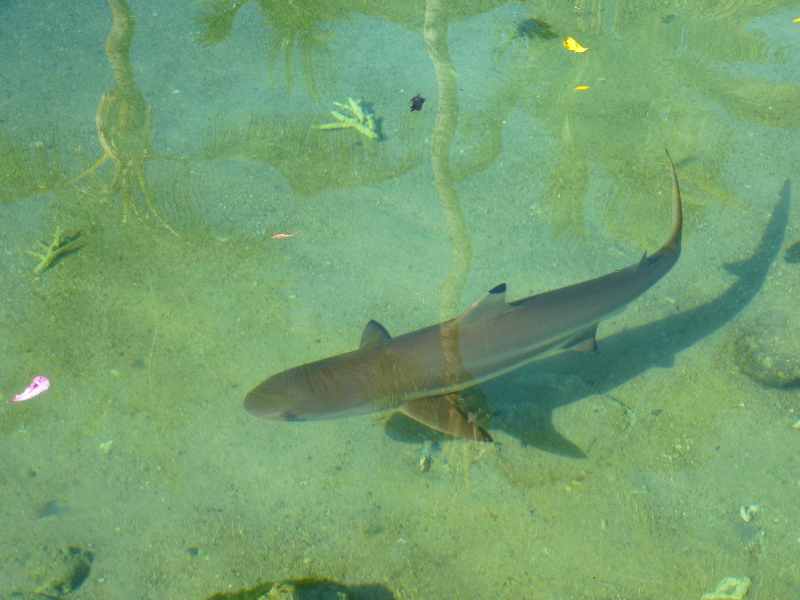 We got out just in time! 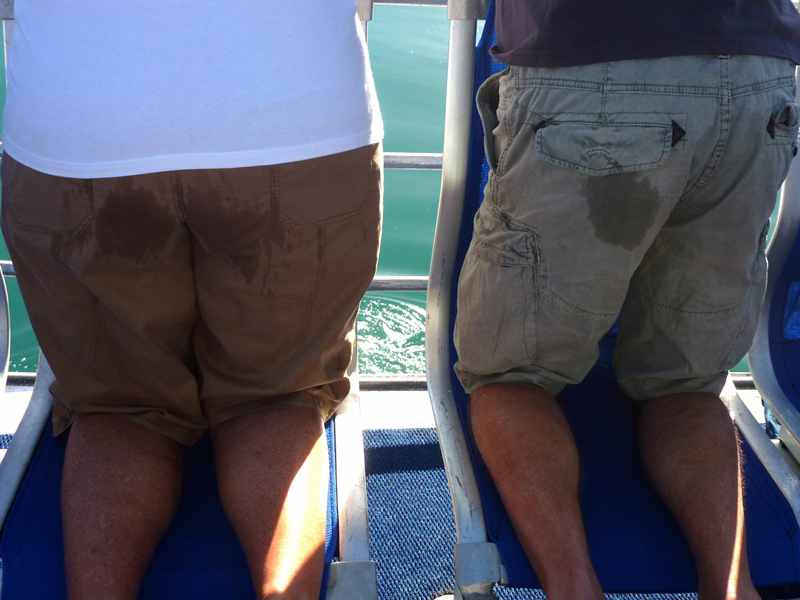 Oops what a relief, out of the water and back in the boat! 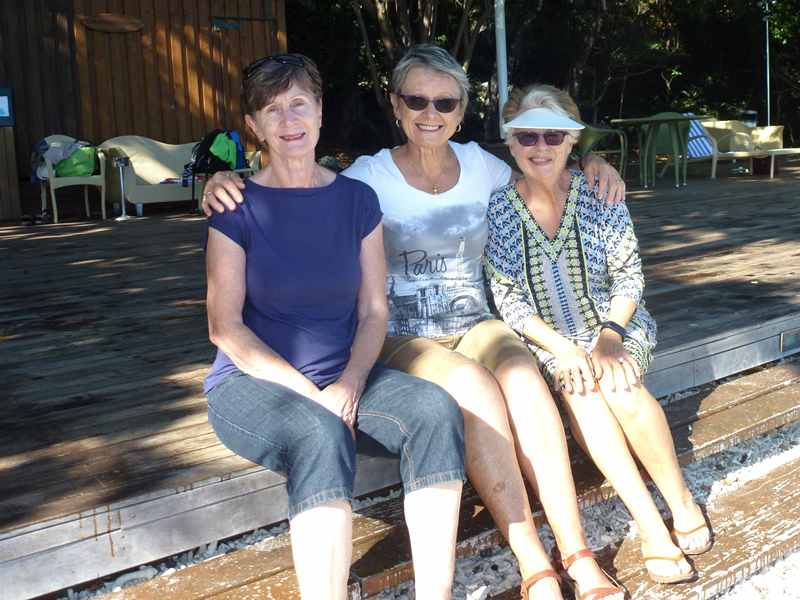 The girls patiently waiting for the boys 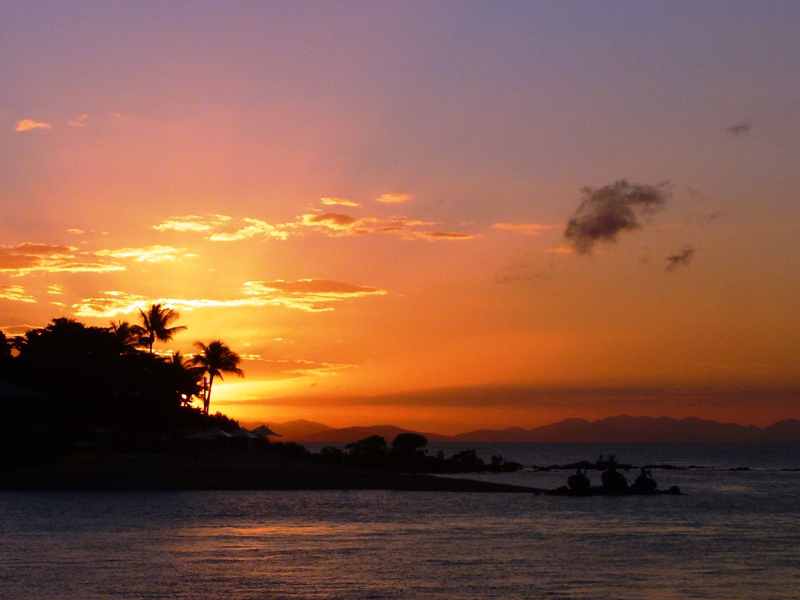 A culture experience comes to the Milton Star Hotel 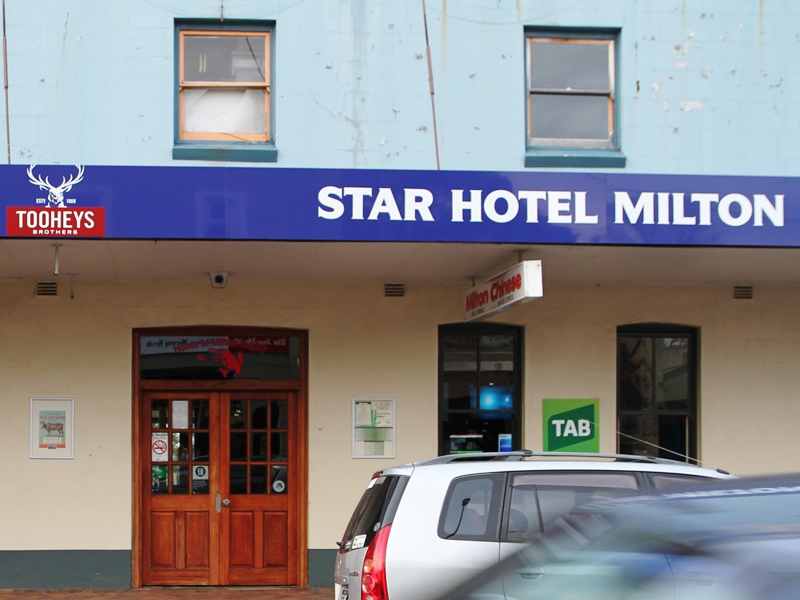 THE STAR, the place to be on Monday nights 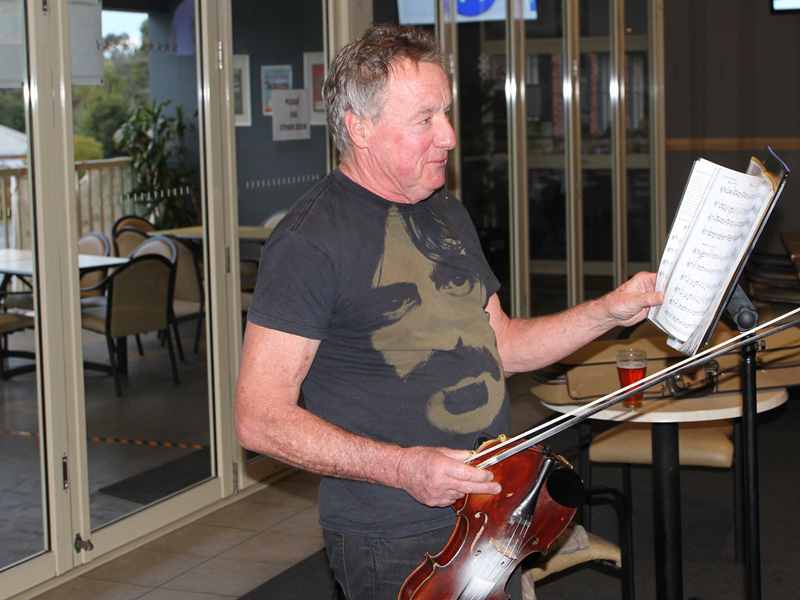 Raymondo woos them at the Star

Raymondo sets the Milton Star Hotel alight:  Monday afternoon’s from 4. to 5.00 pm the Star is attracting an unexpected clientele.

Music lovers are flocking there to listen to the maestro on the violin/fiddle, the one and only Raymondo also known as Ray Ackerman.

This Monday evening  there was a 100% increase in audience as word began to spread. The bar ladies greeting “have you come to fiddle with Ray” it went over my head as I my confessed my ignorance, I didn’t know a fiddle and a violin are basically the same, just different names. After each segment he received an enthusiastic ovation from the audience. One member of the audience seeing me with a camera mistakenly thought I was from the ‘Times Newspaper’ and mentioned “isn’t this special for Milton” and continued to ask “could the ‘Times’ run an article on this cultural experience that has come to Milton, that very few are aware of”? 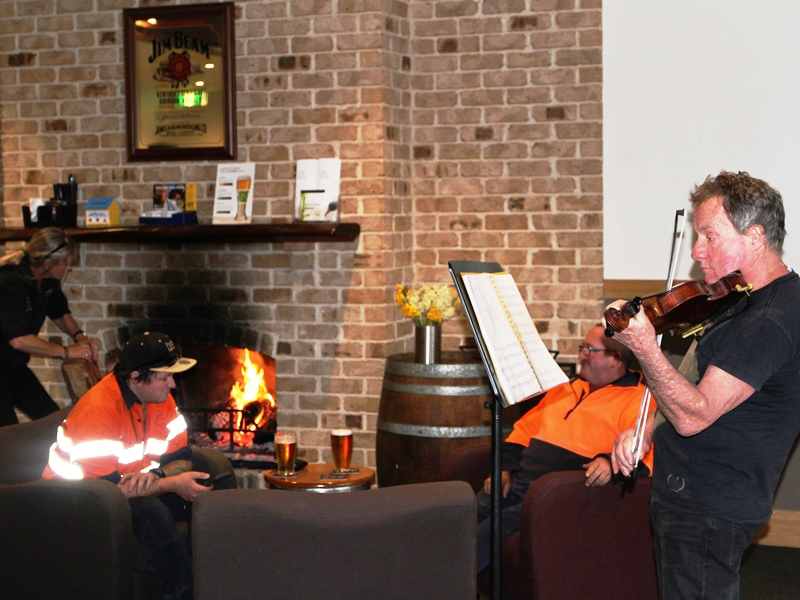 The workmen are intent on listening 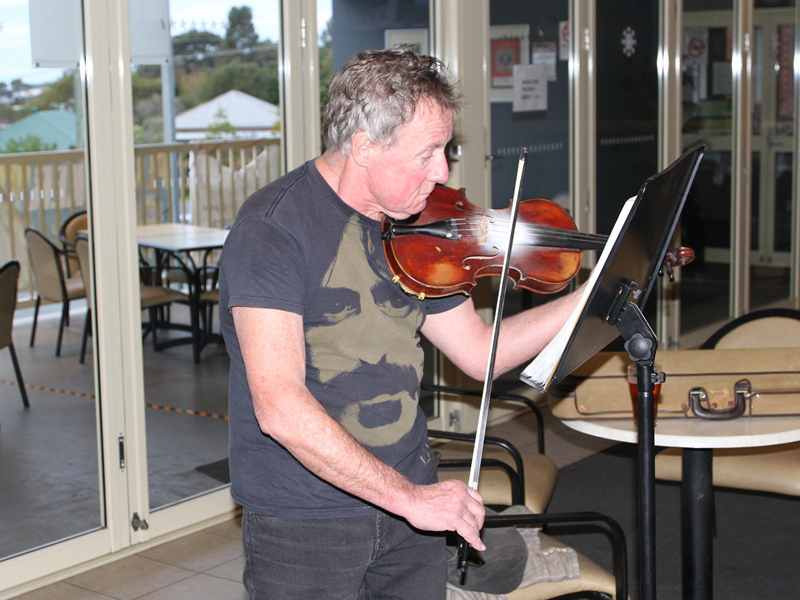 Raymondo finale an all time favourite

The main roads signage workmen are wowed by the maestro as he weaved his magic on his ancient violin made way back in 1836.

Apparently a wooded instrument gets better with age. Ovations after each finale resulted in a 5.25 pm finish, way past the advertised 5.00 pm closing time slot. Then it was story time with a very interesting elderly character who also plays the fiddle in town twice a week raising money for a local charity near the Priceline Chemist & Doctor’s surgery. He shared some touching life experiences. 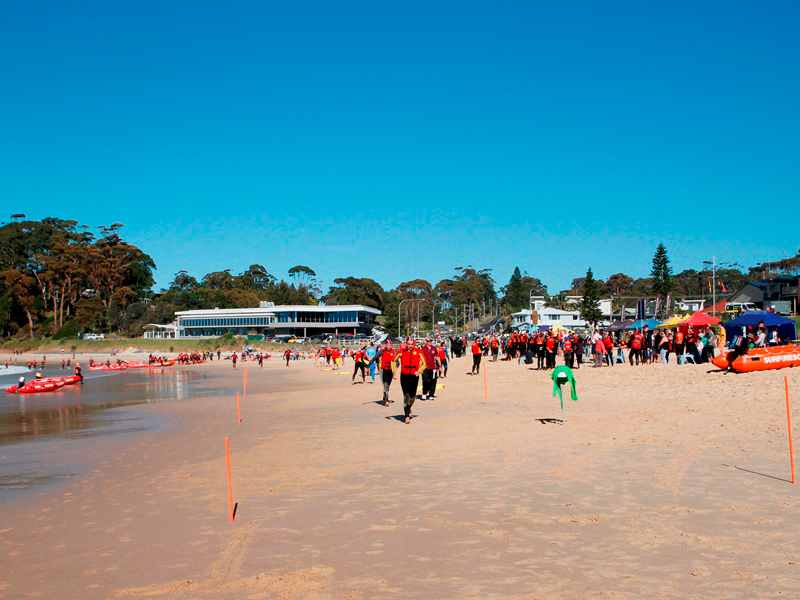 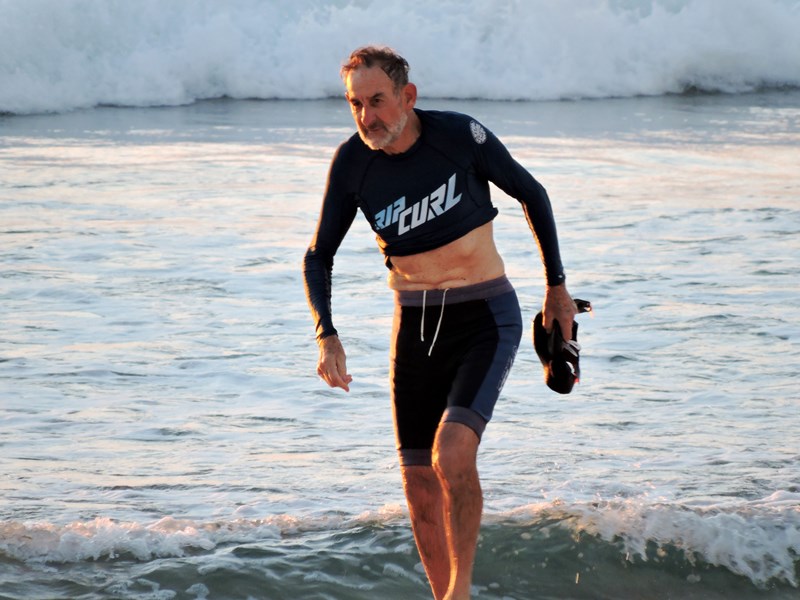 Inflatable Rescue Boats (IRB) Titles: Held yesterday at Mollymook Beach were a huge success. Note in your diary that on the weekend of July 22 – 23, 2016, Mollymook will host competitors for the Australian IRB National Racing Championships.

Dougie back in hospital. Marlene advised that he has an infection in the groin. The gland is enlarged and will be removed tomorrow Tuesday July 5 at the RPA Hospital in Sydney. He will be in hospital for 7 nights. This is the 3rd major surgery for Dougie in the past few months that have each restricted his return to the ocean. Best to send cards to Doug Petroff, 95 Garside Road, Mollymook. 2539 (He would love a visit when he gets home)