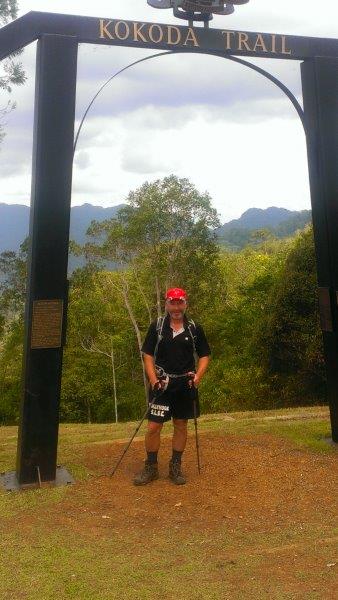 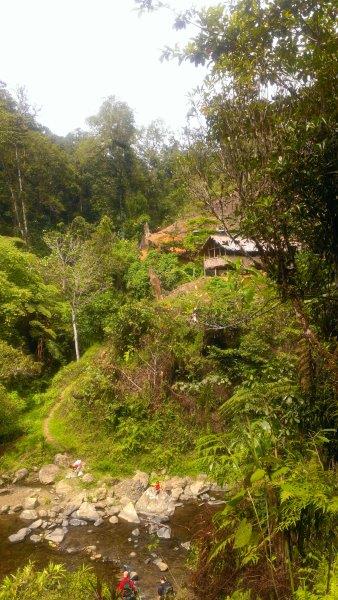 This is only the start John!

John shares his amazing journey with the Mollymook Surf Club & Mollymook Ocean Swimmers and writes to say thanks to all for their support.

“The whole exercise was a fund raiser on behalf of the surf Life Saving movement and especially our own local Mollymook Surf Club. It was a shame that I didn’t complete the trek with the Surf Club guys back in August due to an injury at that time, but nonetheless was able to complete the trek in October and was very proud to reach the target raising $7000.00 that now hopefully benefit our Nippers and Youth Development. My experience of Kokoda will never be forgotten”. 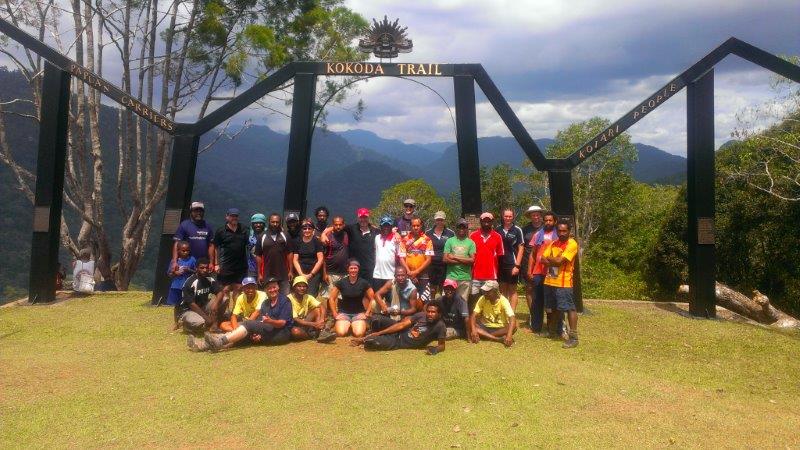 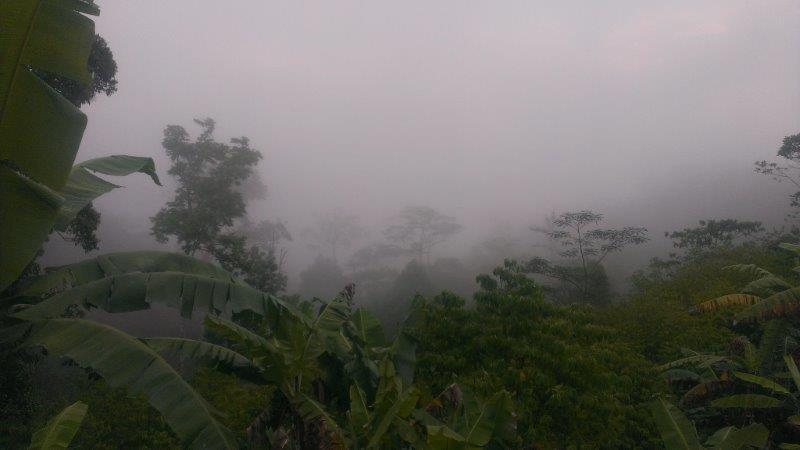 Cloud coming in over the Nauro Village

The building of a special bond

The Guys, Gals and crew on my trek were fantastic, I can now fully understand the term a ‘Band of Brothers’, as I have a special bond with all of them. To share the spectacular views, laughs, songs, farts, body sweat and emotions made this journey very special and something that words can’t describe. The spirit of the place is amazing, from the feeling of the history of what our Diggers have achieved, to the current people of the villagers and trekkers now, there smiles and gratitude and warming nature make you really appreciate the things you love back home, not so much the materialistic things, but family. (Not just relatives, but friends and the family members of our Surf Club) I have an appreciation for all, it has opened up my emotions like nothing I have ever felt before. With others I have spoken to, they have also had similar feelings on completion of Kokoda. So it has something special to give. 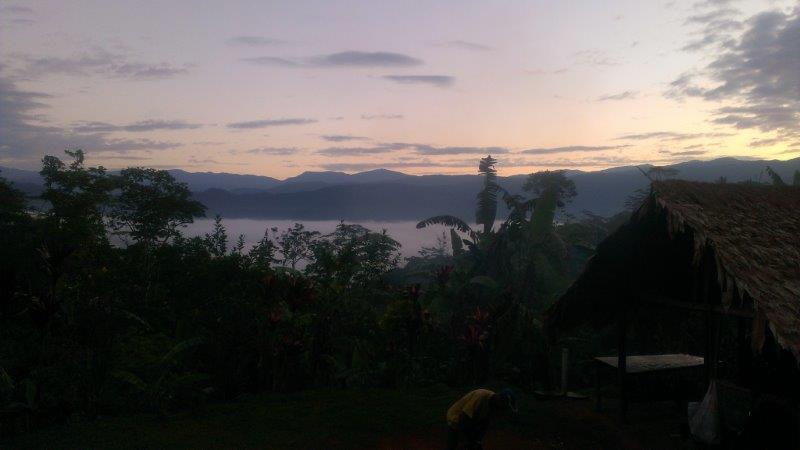 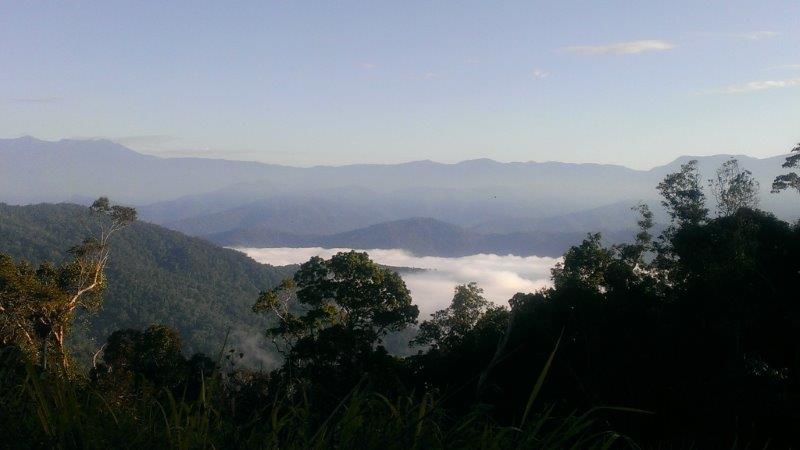 Cloud in the valley from Menari Gap 1120mtrs above sea level

The scenery is spectacular

The trail is tough, with lots of high steep sections, and with the high humidity it really does take it out of you, but it’s like anything, you get into a rhythm and go with it. Some of the villages are perched way up high, and many of the huts are located on the sides of the mountain faces, it’s amazing that many crops are planted on the sides of these huge hills, I think you would need to be a mountain goat just to look after them.

You don’t realise how flat the South Coast is compared to PNG. The trail itself is narrow in some sections and shows little erosion, which I find amazing when you consider how many trekkers actually do the track on a yearly basis.

The scenery is spectacular, with miles and miles of ongoing mountain’s, where the cloud rolls in on the valleys, then comes in to engulf you. It becomes a little eerie. PNG is in drought at the moment, and most of the smaller creeks were just down to a trickle, others were ankle deep (normally knee to waist deep) there were still some great spots for swimming though, and enough water for a wash after a hot days trek, as most villages had running water from a tap.

Most of the track has a massive maze of twisted rain-forest roots, that intertwine and make foot holes, which make for easier climbing up the steeper sections, though they can become pretty slippery when the cloud comes in and coats everything with a layer of moisture.

What goes up, must come down and the Kokoda Track is exactly that, up, down and steep. The old knees cop a flogging on the down, as most of the steps are all different heights and slippery, so concentration is pretty full on to prevent the butt slides. I never thought trekking poles would benefit as much as they did, and I’m glad to have taken them, they saved me from falling quite a few times, and took a lot of the load of the knees on the descents.

One thing you have to do is take time out to stop and look up, because your busy looking at the ground or the feet in front of you, you tend to forget to look up and around. You want to take in as much as you can. 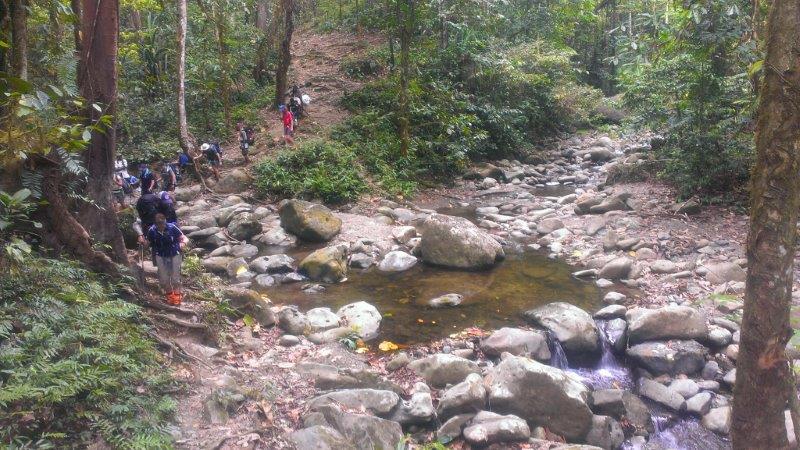 One of the many creek crossings, this one at Ofi creek 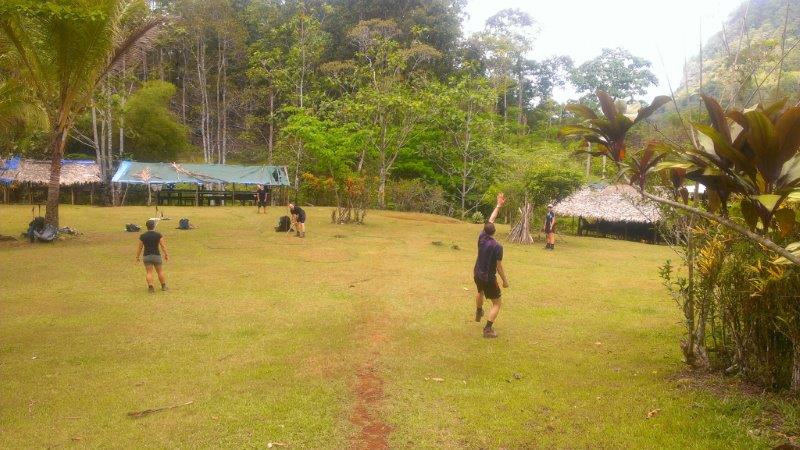 How lucky we are

Just being there, you had a feeling that can’t be described in words. You soak up all the scenery and breath the fresh air, and think to yourself how lucky you really are. 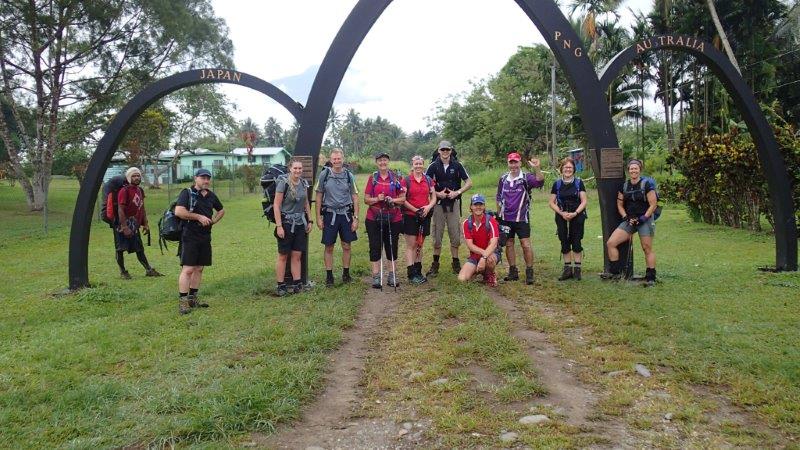 The Arches at Kokoda 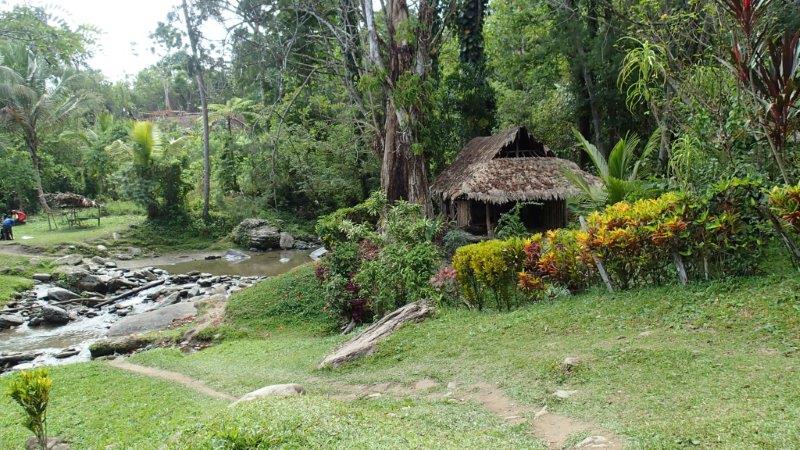 Beautiful Village of Hoi, we were supposed to stay for the night, but we had to make up a day

A time to reflect

The service at Isurava Memorial, was special, a beautiful place to reflect, and to think we lost so many during battle, and being there you can understand why: the Japanese had the upper hand, they were experienced in the Jungle environment and in close combat. 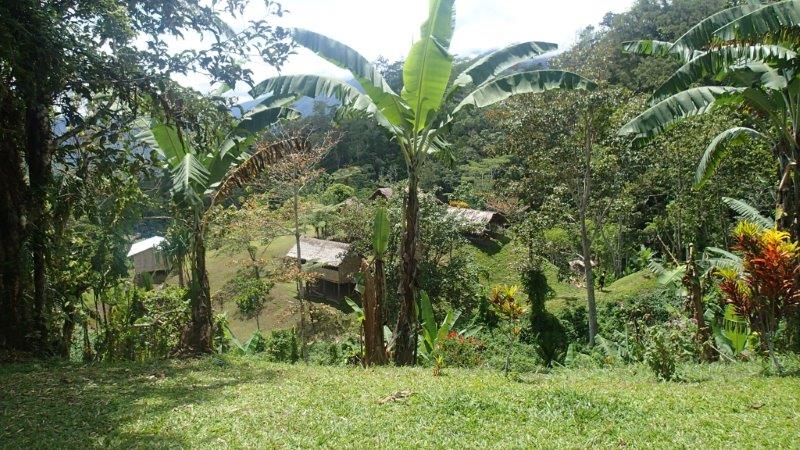 More villages of Hoi over the next hill 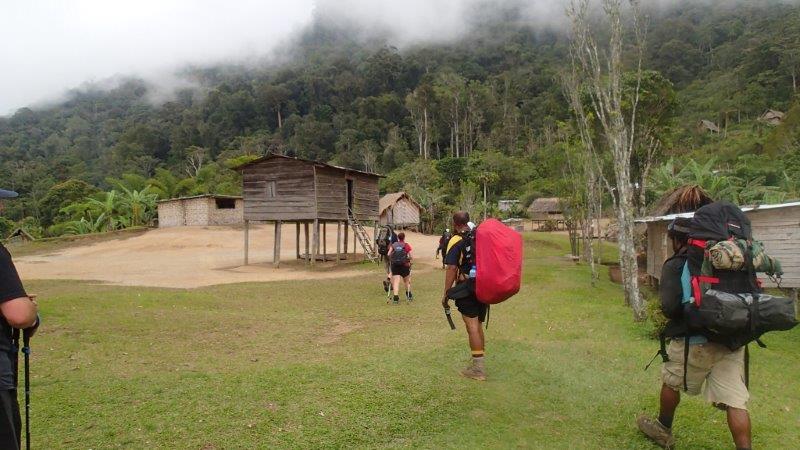 Further on it’s the same, beautiful villages on the sides of hills, fantastic scenery and more walking, more sweat, you become used to the conditions, and you do look forward to rest stops, not just to drink and refresh, but why your actually there. 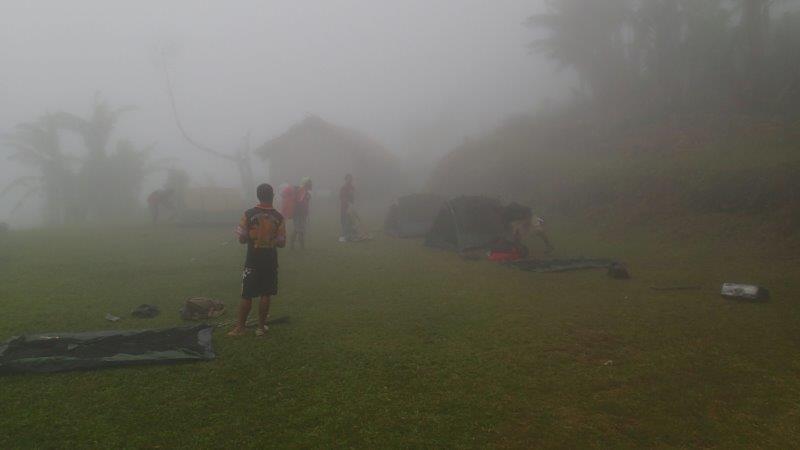 Cloud coming in whilst the crew are setting up camp near the Isurava Battle site. Very eerie here indeed. 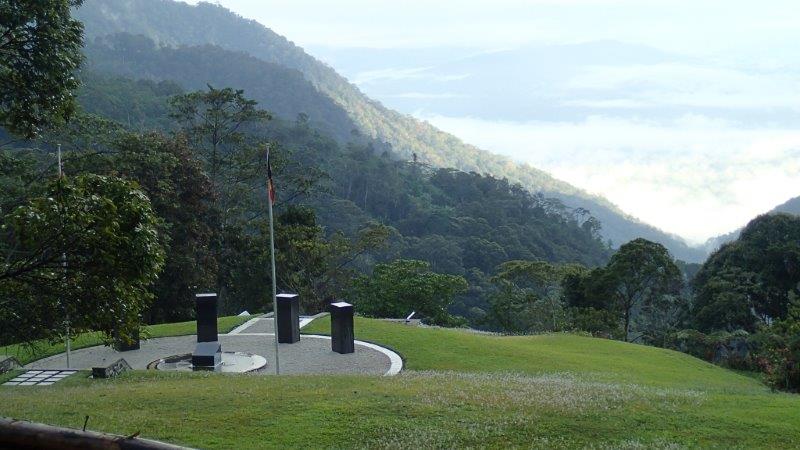 Isurava Battle site Monument, The 4 standing pillars , Read Courage, Endurance, Mateship and Sacrifice. We had a small service here in memory of the ones that were lost

The walk up to Brigade Hill was steep, whilst on track, the porters and guides made wreaths from flowers and plants along the track, when we reached Brigade Hill and we had a hours rest. In that time the Crew cut trees to make flag poles and dug them in the ground next to the monument plaque, they raised the Australian and PNG flags, the Porters and Guides gave us our wreaths, we had a service there for the ones lost and laid our wreaths next to the monument, we read poems from survivors, we sang the Australian and PNG national anthems, we thanked the PNG crew for what their relatives did, we read the Ode and Last Post, it was a very emotional time, after the service was finished we all sat on the side of the hill, it was very surreal, I was feeling hollow. We comforted and embraced………… 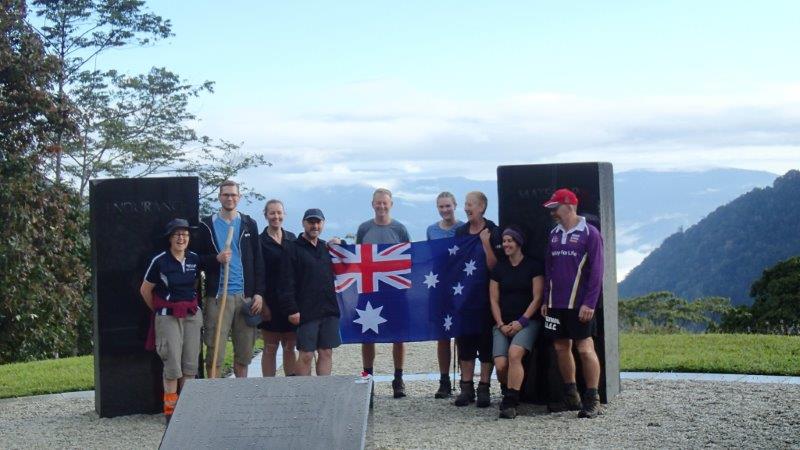 Group photo of the Team. Being ‘Relay For Life’ back in Ulladulla, I was in support over in Kokoda 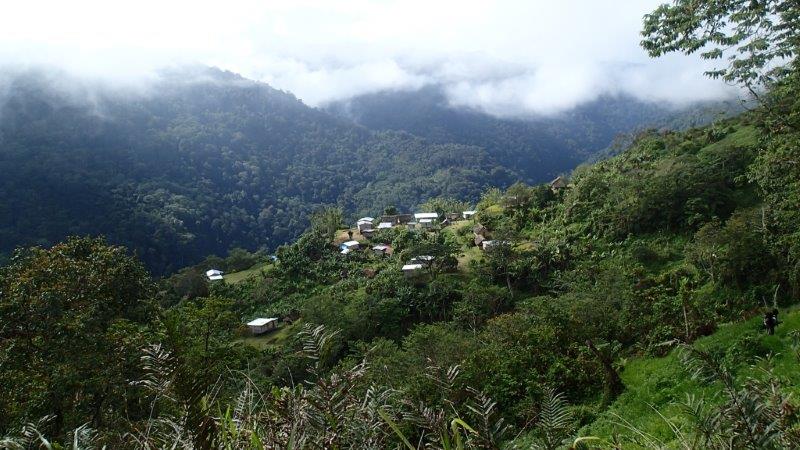 The Memorial Services on the Track made for a special experience, it stands for what Kokoda is, the reason it is there.

The walk from Brigade Hill was very quiet. I felt lonely for once on the track, it wasn’t long before Marcia broke out into a song, then it was back to normal.

To think we have only 3 more days on track, the time seems like its flying, considering we have covered more than 65Klm’s so far, we all feel pretty good.

The last night of our Trek, we had lightning and heavy rain in the afternoon, it was like being in a warm shower. The Rain was short lived and stopped by afternoon tea. The rain made enough of a impact for the next morning, the track was slippery, the clay was building underfoot and was like grease on a polished floor. A few of us had Gutser’s and the creek had risen enough that we had about 6 creek crossings on the last day.

Finally I got to try out my ‘Keen Sandals’. Yahoo!……. As soon as the creek crossings ended, we had 550mtr climb to Imita Ridge. 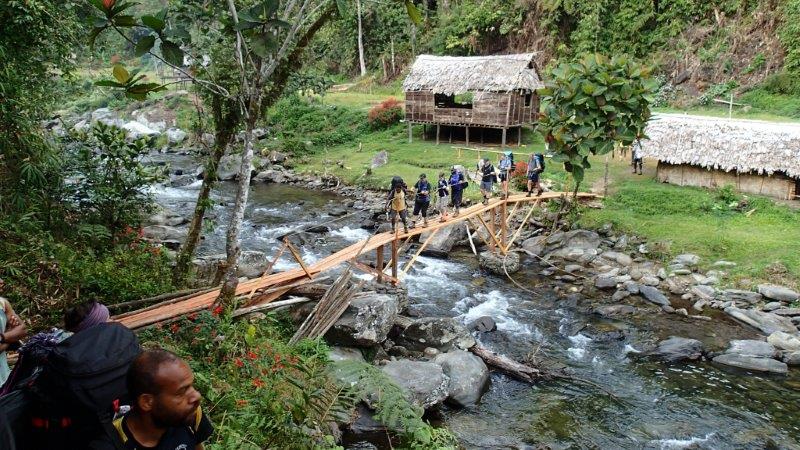 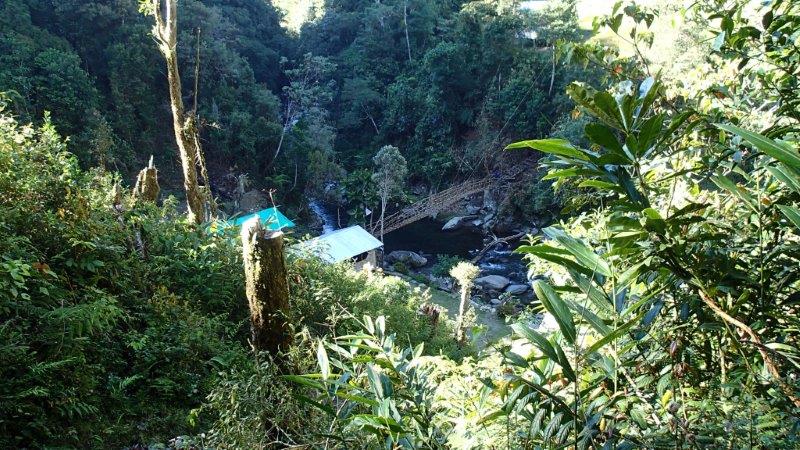 Looking down to Templeton’s

The heat and humidity was intense

A Mid 60’s lady, was on her second trek, the 1st trek she was carried out on the 2nd last day. But she was determined to walk out of this one.

She had been training for 18mths, but the humidity is what gets you. We had been cheering for her and she finally reached the top, there were tears of Joy, (no pun intended) after a well-earned rest we made for Camp Goodwater, the last camp before the finish, we had a game of Kokoda cricket, whilst waiting for the others to catch up, then walked to Goldie River for a refreshing dip, nearing the end, we had one last big climb, a snaking trail of 300mtrs to the final arches…

Nearing the arches we waited for Joy and Liz, the crew were standing on each side of the arches singing a traditional PNG song, there were lots of tears and emotions going through those arches, it was special all right. We all made it.

This is one trek I will never forget.

I have lots of awesome memories from the trek, and I wouldn’t hesitate to do it again someday.
.