A unique concept creates the ‘World Longest Golf Course’ that stretches 1,365 Km across the great expanse, namely the Nullarbor Plains. The courses varies in quality from the amazing Kalgoorlie course with its undulating ‘greens’, grass fairways and the ‘rough’ consisting of fine red dirt to the unique ‘links’ along the various roadhouses with their synthetic tees and greens, wildlife and a variety of fairways, each with their own degree of difficulty. A great feature of the Nullarbor course is that it helps break up the long haul across the Nullarbor with each link adding so much variety and challenge. 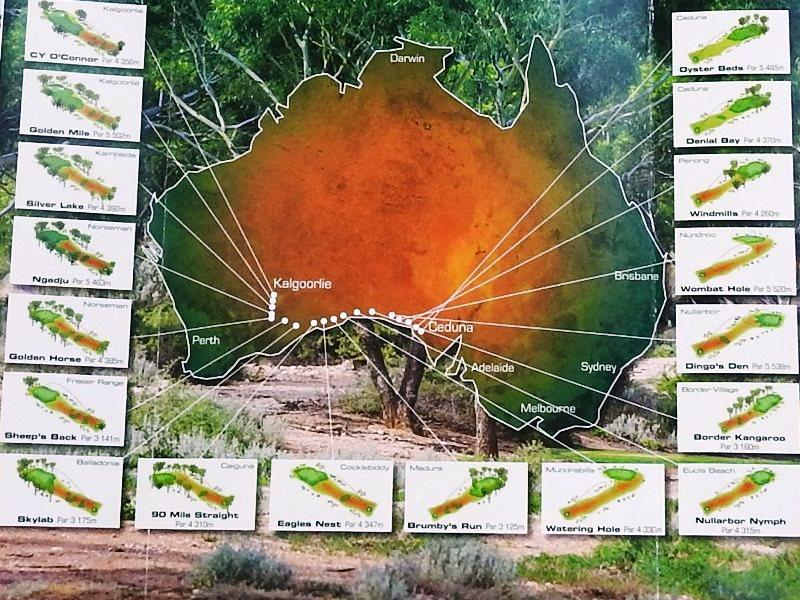 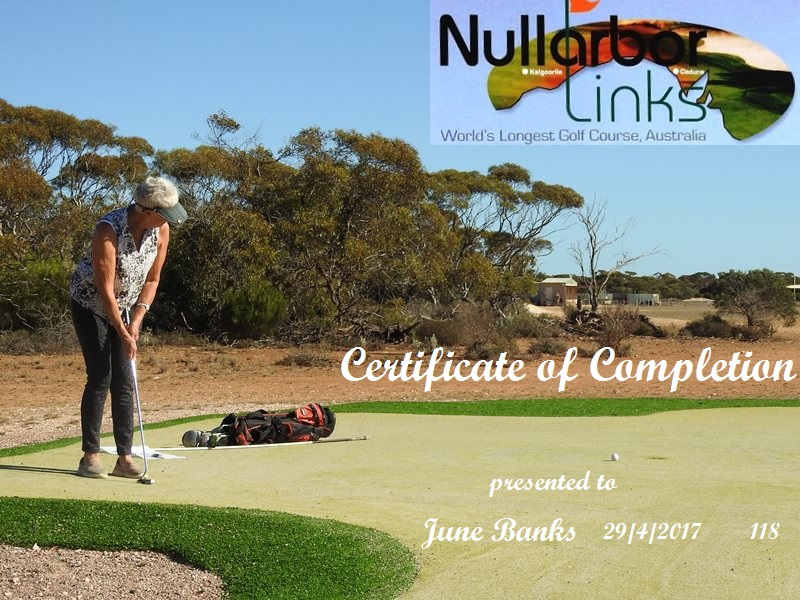 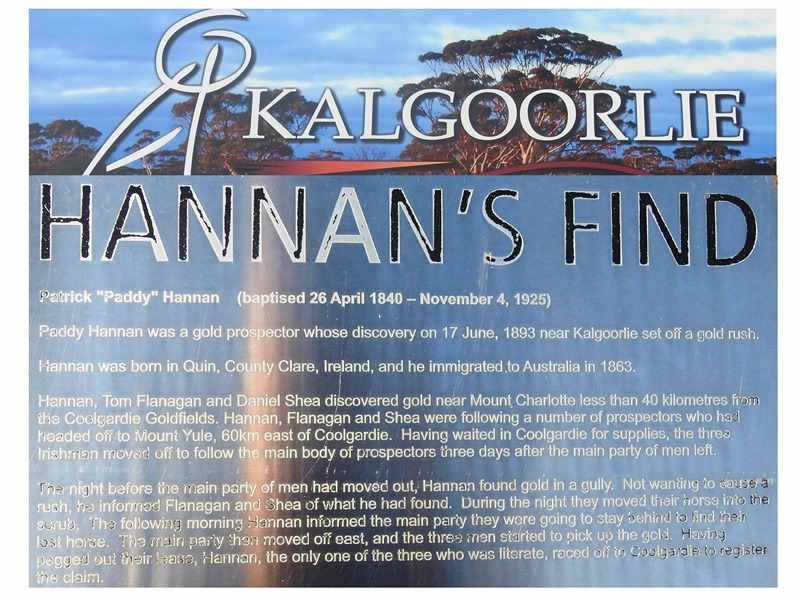 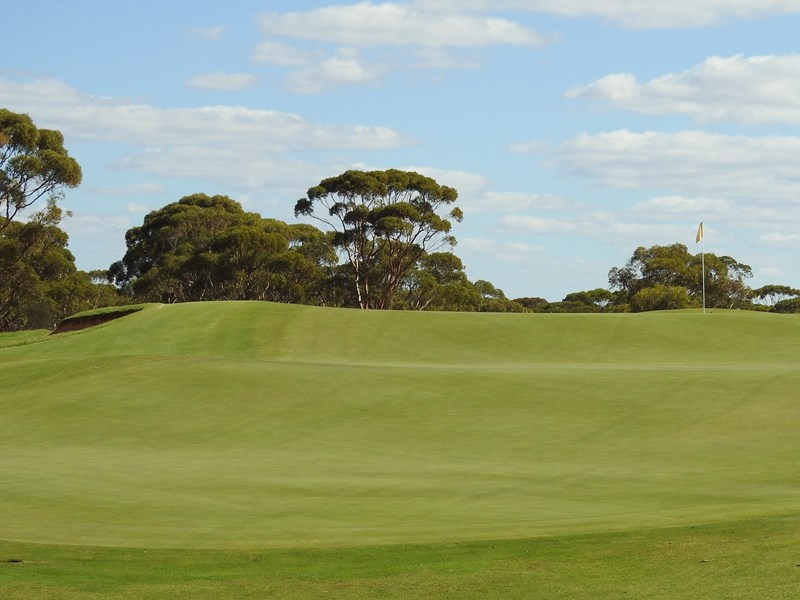 Kalgoorlie with its undulating Golf Greens

This majestic golf course at Kalgoorlie ought to be on every keen golfers ‘bucket list’. Two holes of the 18 hole course are dedicated to the Nullarbor Links. The undulating greens are unique, no problem to an accurate putter, but over put and you could be in big trouble.

The 1st hole the ‘Golden Mile’ is named in honour of Paddy Hannan who discovered gold back in 1893 that led to one of Australia’s great gold rushes and went on to underpin the development and longevity of this great town and its association with gold.

A 2nd hole is named after Engineer-in-Chief CY O’Connor who designed the water source / pipeline from the Mundaring dam outside of Perth to Kalgoorlie, a distance of 560 Km and completed back in 1903.

The Kalgoorlie course is similarly rated with our own Mollymook 18 hole ‘Hilltop’ course. 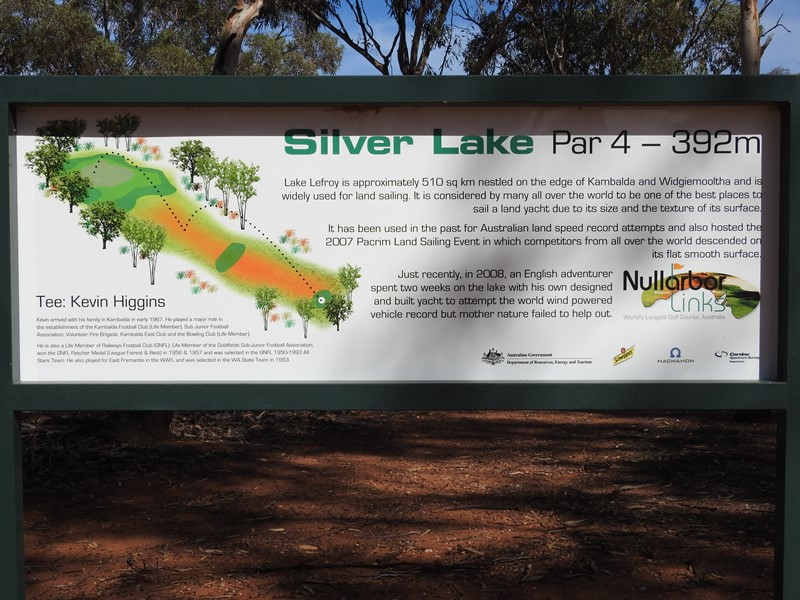 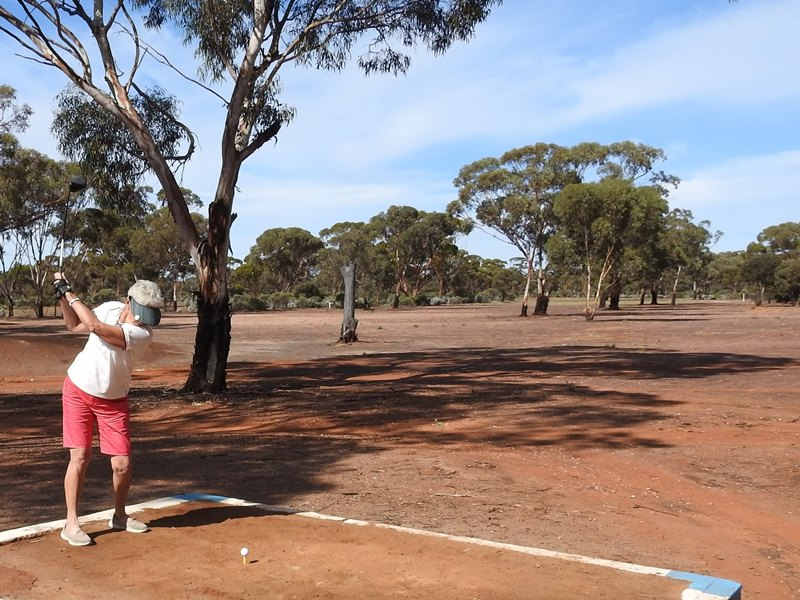 Kambalda uses two holes of its 18 hole course for the Nullarbor links section. After playing on the majestic Kalgoorlie course, the next link is at Kambalda. I guess you could say it was the antithesis to Kalgoorlie and an introduction to what you could expect on the various links across the Nullarbor. A lot of red dirt and scrub.

Not so many years ago Kambalda was a thriving Nickel and Gold mining town. Whilst nickel and gold continue to be mined, the evolving economy over the past few years has seen the introduction of workers who now ‘Fly in Fly out’. In short the workers have relocated to live in Perth and ‘Fly in / Fly out’ for their work duties in Kambalda. As a result, Kambalda now has so many empty shops and homes. Progress? Asked if there were a mid-week ladies comp and was told “there use to be with 26 ladies regularly playing in the mid-week comp whereas today we only have 2 ladies and 6 male members in the Kambalda Golf Club. 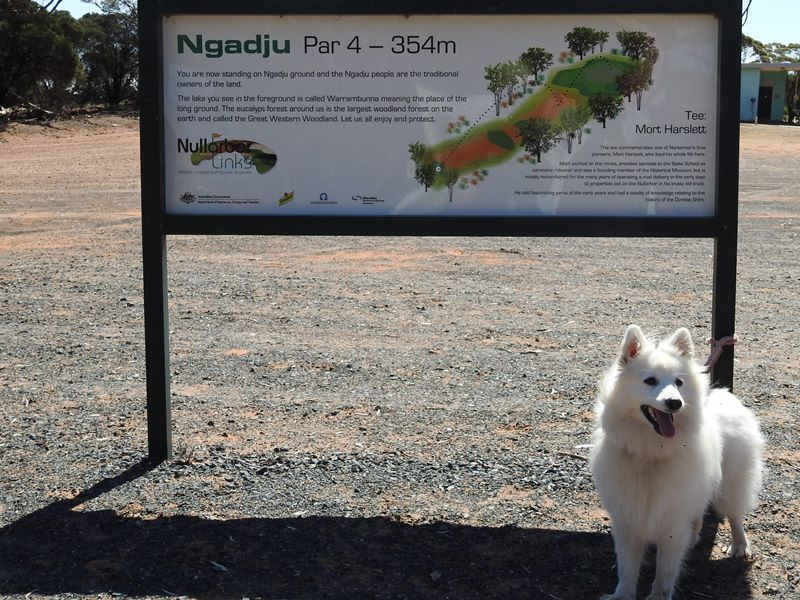 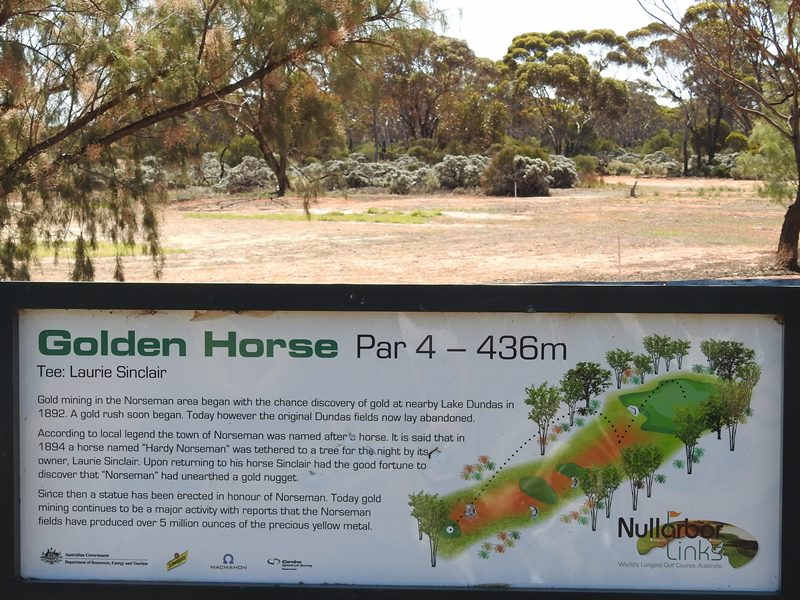 Norseman has two of its 18 hole course dedicated to the links. One hole is named ‘Ngadju’ in honour and memory of the traditional owners of the land. Whilst the other hole is aptly named ‘Golden Horse’. Folklore has it that a horse named ‘Norseman’ scratching the ground unearthed a huge gold nugget that led to a long history of gold and mining in the area, hence the ‘Golden Horse’.

It is a lovely course, well cared for albeit with synthetic tees and greens. Both holes were par 4 with a low degree of difficulty. 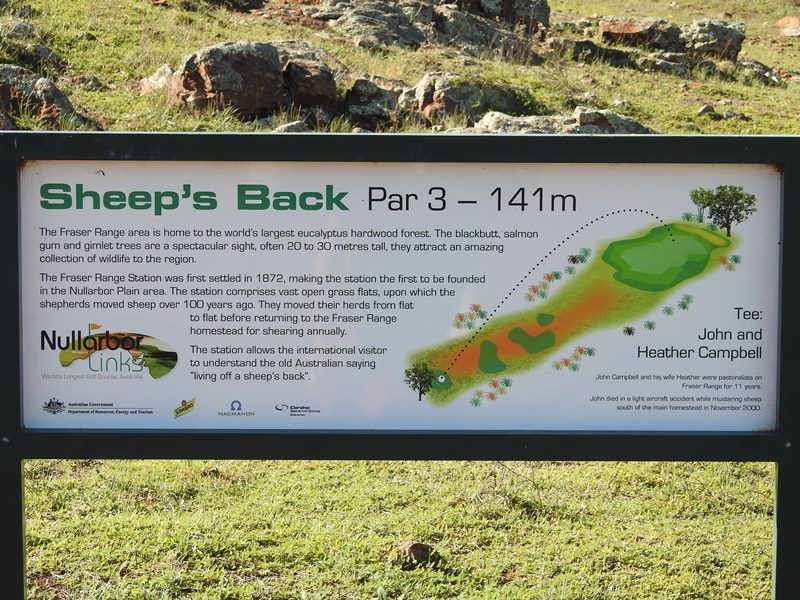 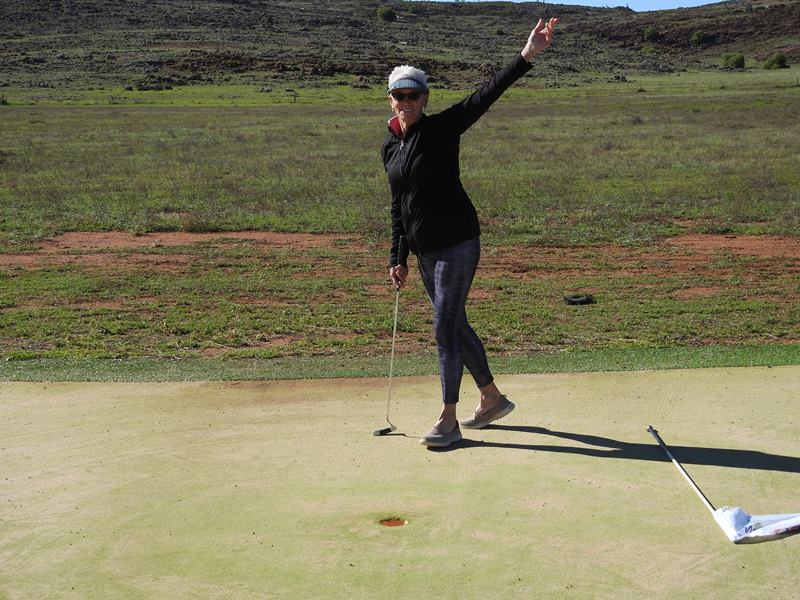 The Fraser Range Station was first settled in 1872 as a sheep station. Today its a caravan park with an open camp-fire operating each night and meals available for those who would like dinner provided. We enjoyed wine with the many other campers spending the night there whilst being entertained by Ian Duff a country singer from Injune, a small town in South West Queensland. A wonderful evening.

The Fraser Range Station is on the western edge of the Nullarbor where you are confronted by a range of scenic granite hills and surrounded by the world’s largest eucalyptus hardwood forrest. It was the first station settled on the Nullarbor and is steeped in history, has stone buildings, gullies and dams originally constructed using Aboriginal labour. A great place to camp, even spend a day or two there and enjoy one of there organised tours of the station, historic sites and granite mines.

Oh the golf? A par 3 hole aptly named ‘Sheep’s Back’. Tee off with a tree smack bang in front that you need to hit over for a lovely 2nd shot pitch onto the green. It has a grass fairway and synthetic green. Very picturesque and especially delightful when you par the hole. 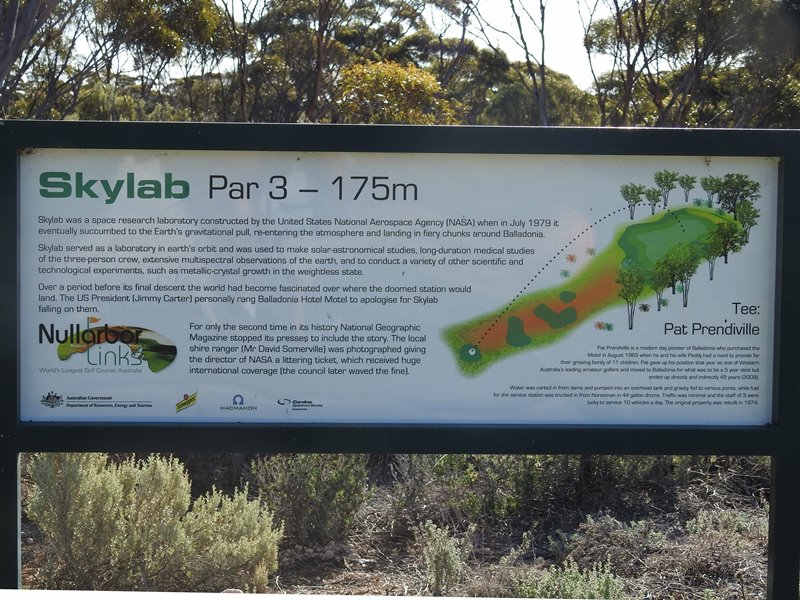 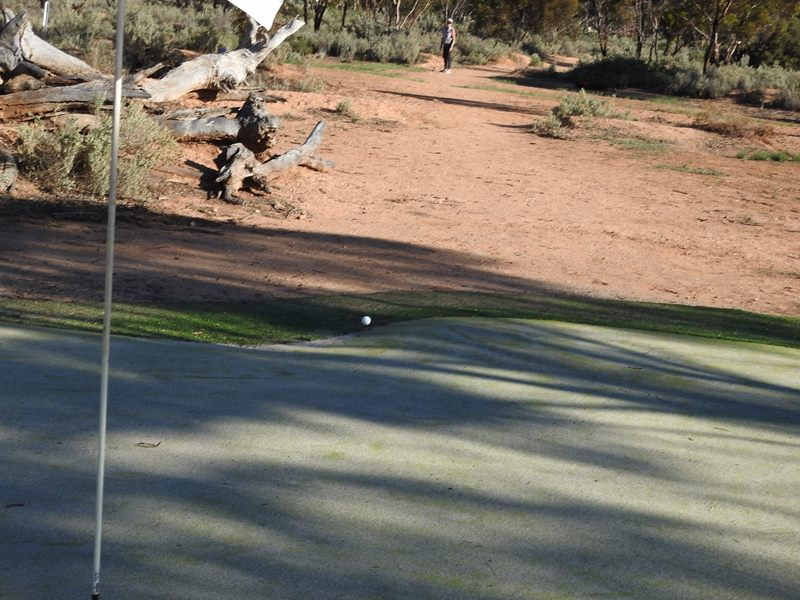 The Balladonia Link is a Par 3 x 175 m. Looks good but it turned out to be a real challenge, as I didn’t clean hit over the top of all the scrub in front of the tee on the ‘fairway’.

Balladonia has a cultural heritage museum that uses interactive technology to recreate the area’s history. Aboriginal dreaming, pioneers, Afghan cameleers and the crash landing of NASA’s Skylab in 1979 are all included.

The latter giving this link its name, the ‘Skylab’ link after the Skylab space research laboratory constructed by the United States National Aerospace Agency (NASA) eventually succumbed to the Earth’s gravitational pull, re-entered the atmosphere and landed in fiery chunks around Balladonia. 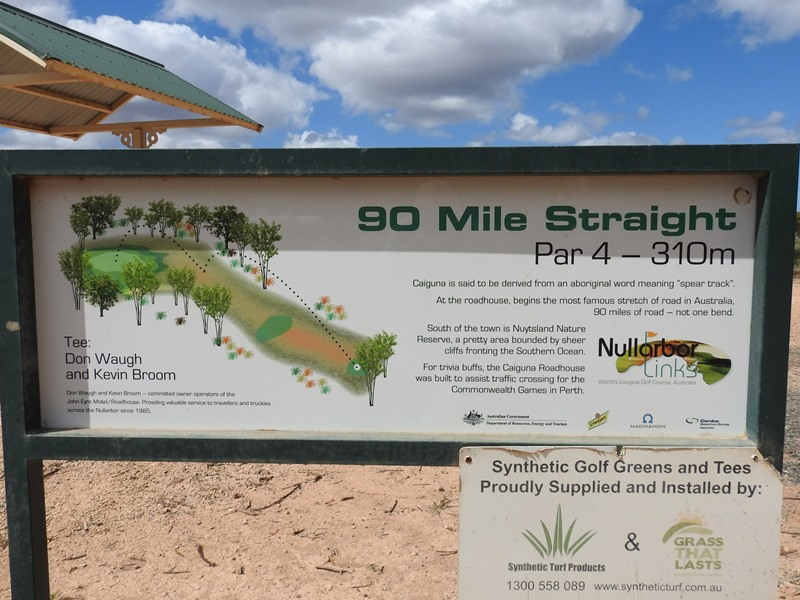 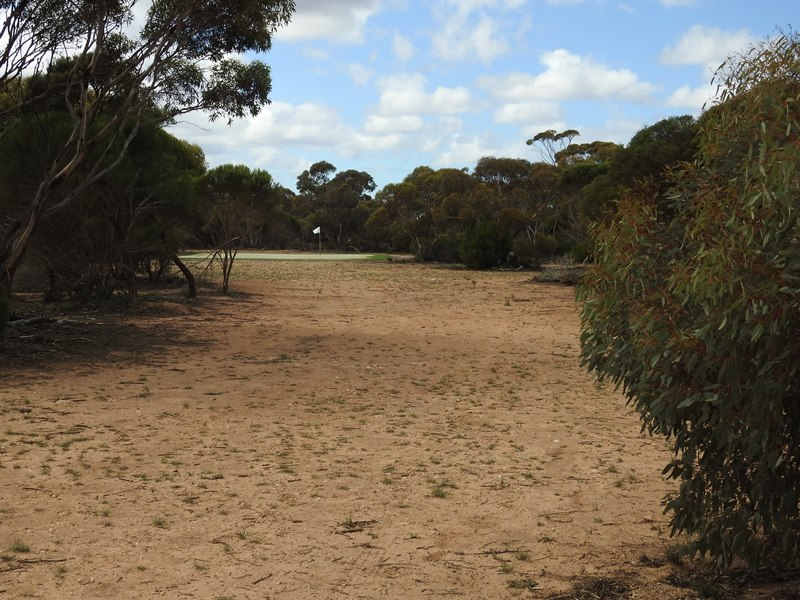 Caiguna golf link is a Par 4 x 310 m. dog-leg fairway. Caiguna is known as the beginning of a 90 mile stretch of dead straight road/highway ahead. However unlike its namesake, this link is a difficult ‘dog-leg’ Par 4.

Caiguna’s other features are the unique blowhole for viewing about 5 Km away and the stunning Baxter Cliffs named after Edward John Eyre’s overseer, John Baxter. 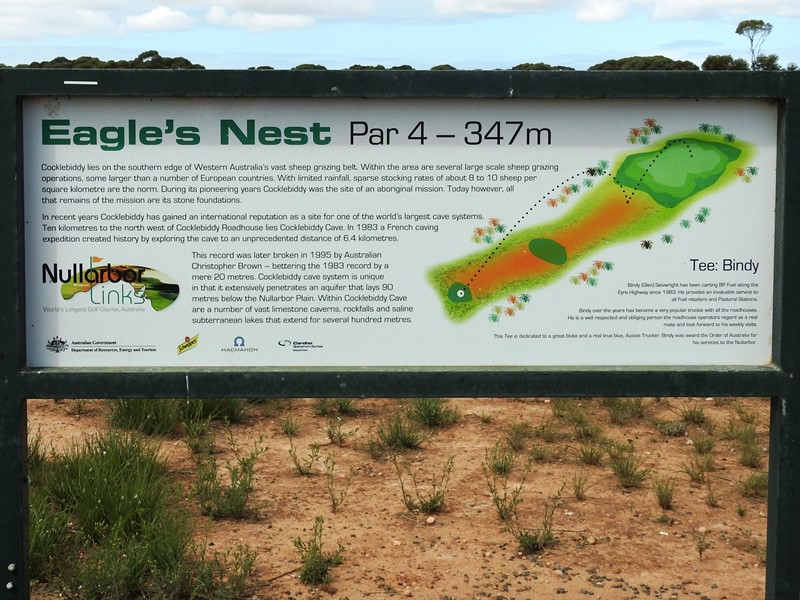 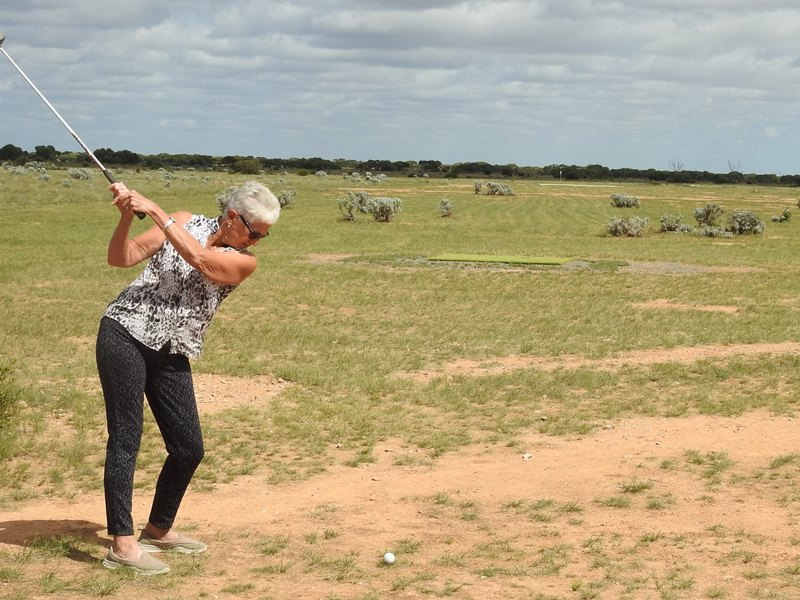 Cocklebiddy golf link is named ‘Eagle’s Nest’ it is a pretty straight forward, 347 m par 4 link. Pic above you can see the white flag ahead on the green. (Why called ‘Eagles Nest’. My guess is the number of eagles along this stretch of road devouring the carcasses of dead wildlife.)

Originally established as an Aboriginal mission in early pioneer times. It has some popular fishing and whale watching spots. 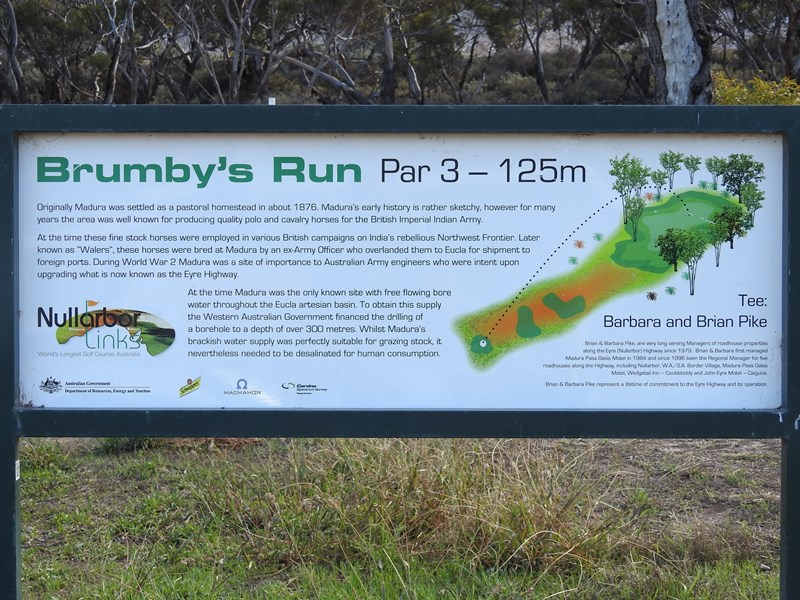 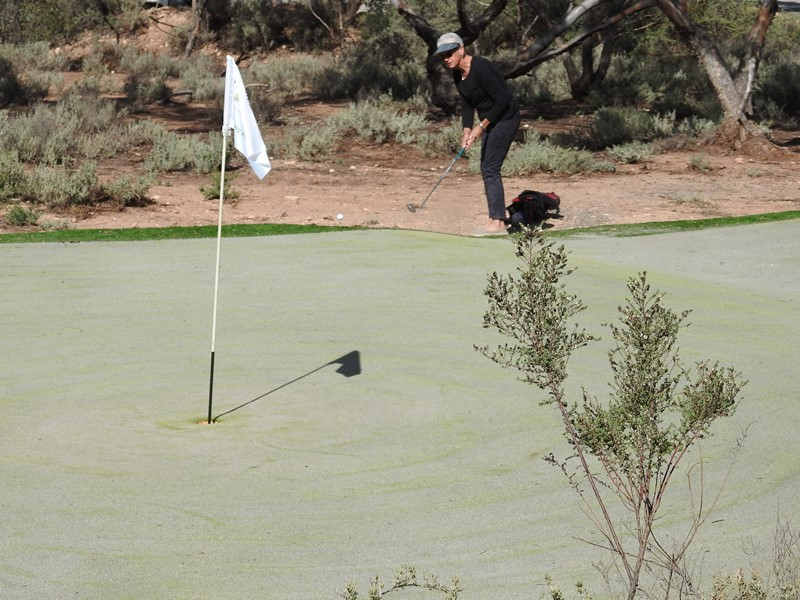 Madura is a nice 3 par link adjacent to the roadhouse. The link is named ‘Brumby’s Run’ which perhaps has some link to its history for producing some fine horses for Polo and the Cavalry, the latter used by the British Imperial Indian Army. Madura is a mid way point between Adelaide and Perth and was originally settled in 1876. It has spectacular views over the Roe Plains and is a service point for the traveller with a roadhouse, restaurant/cafe and its golf link. 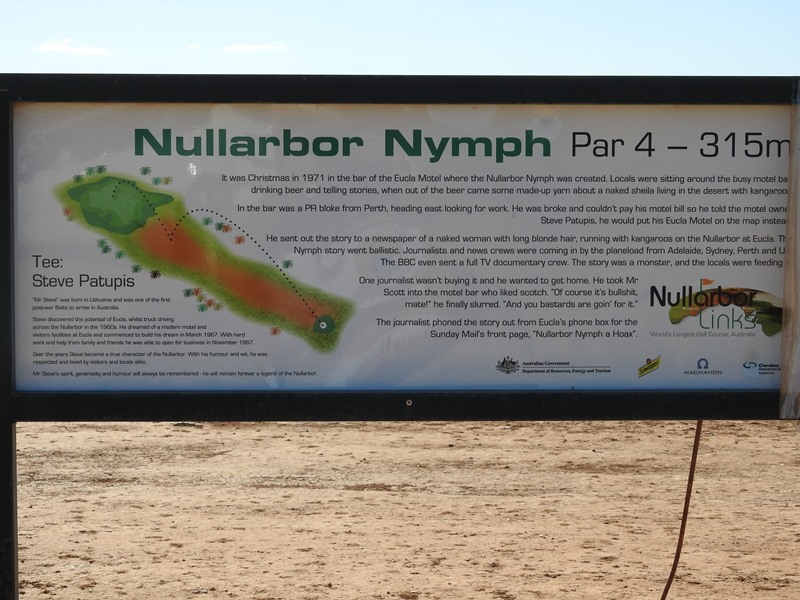 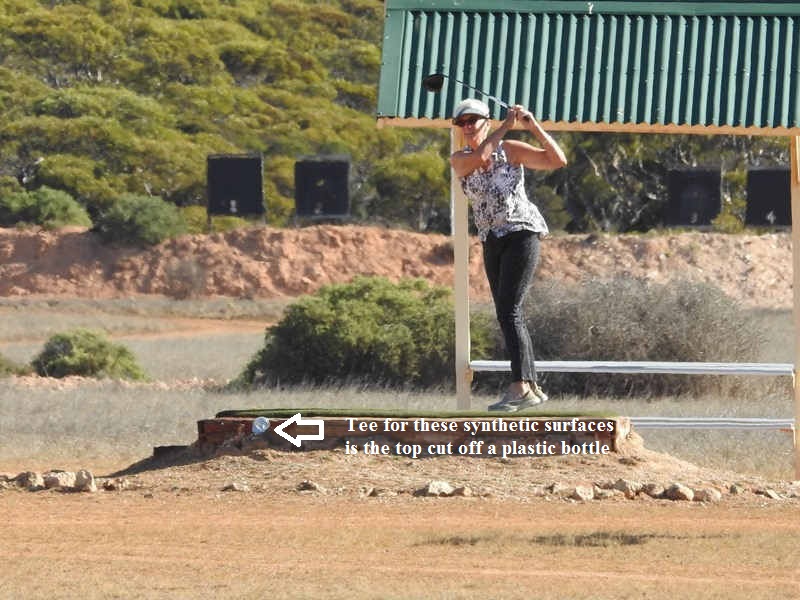 The Eucla golf link is a Par 4 x 315 m. hole. Straight forward provided you hit straight and stay on the dirt fairway. The Eucla golf link is named the ‘Nullarbor Nymph’, apparently from the mythologic story of “a naked sheila living in the desert with the kangaroos”. Apparently this story was the outcome of some locals telling yarns following a long drinking session at the bar of the Eucla Motel  that gained some news headlines, thus the Nullarbor Nymph was created. 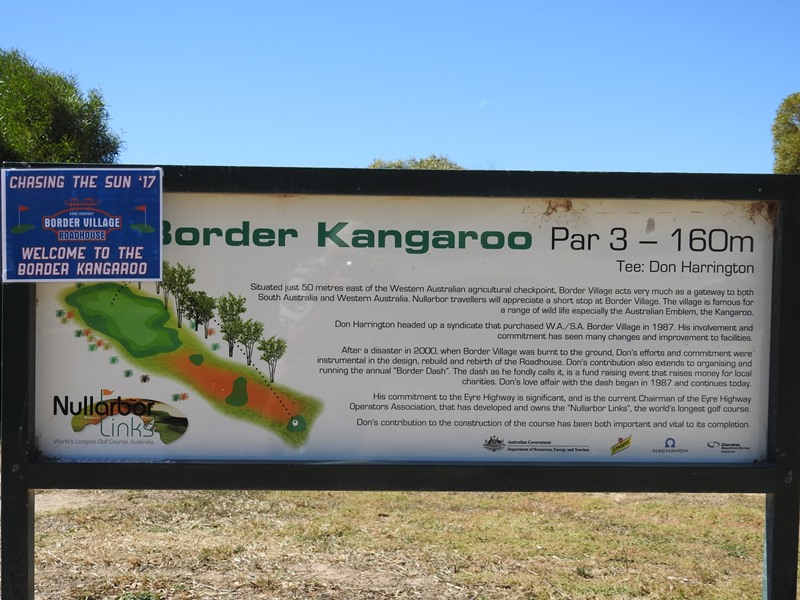 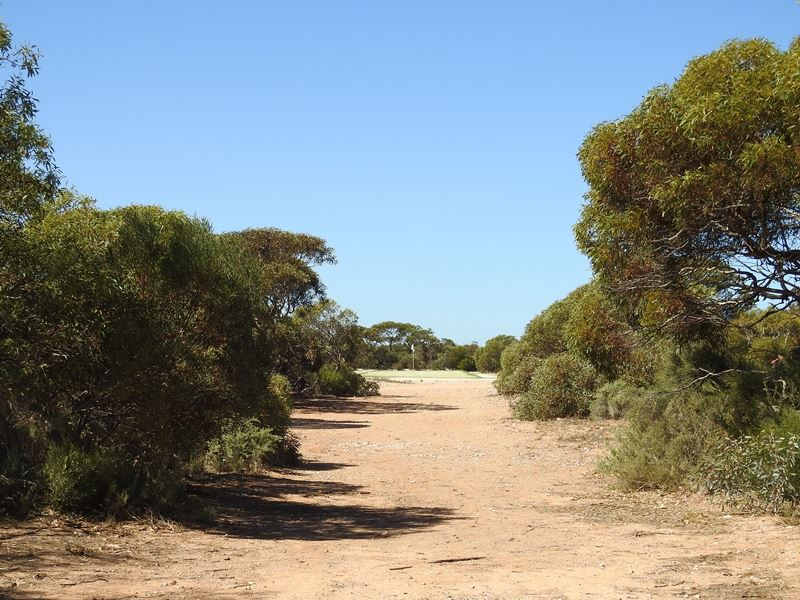 The Border Village link is named the ‘Border Kangaroo’ after the giant kangaroo named “Rooey 11” that presides over the border village.  Here is the border between W.A and S.A. aptly named Border Village. It is 482 Km west of Ceduna. It is a service point for the traveller with a hotel/motel, caravan park, roadhouse and its golf link. It also boasts a fantastic signpost to many parts of the world.

This link was unique in so much the fairway between the scrub on either side was so narrow, perhaps only 4 or 5 metres max. wide. Only a par 3 x 160 m. but vital that your shot is dead straight, otherwise trouble beckons. 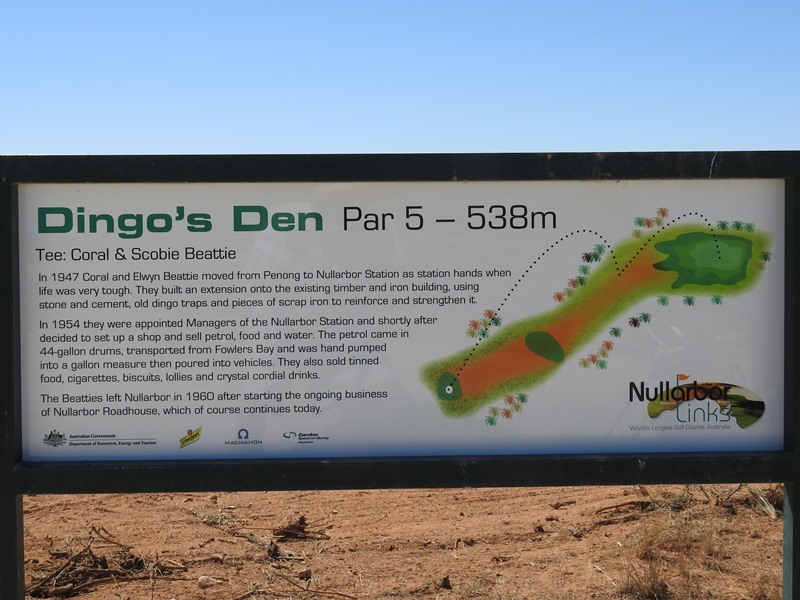 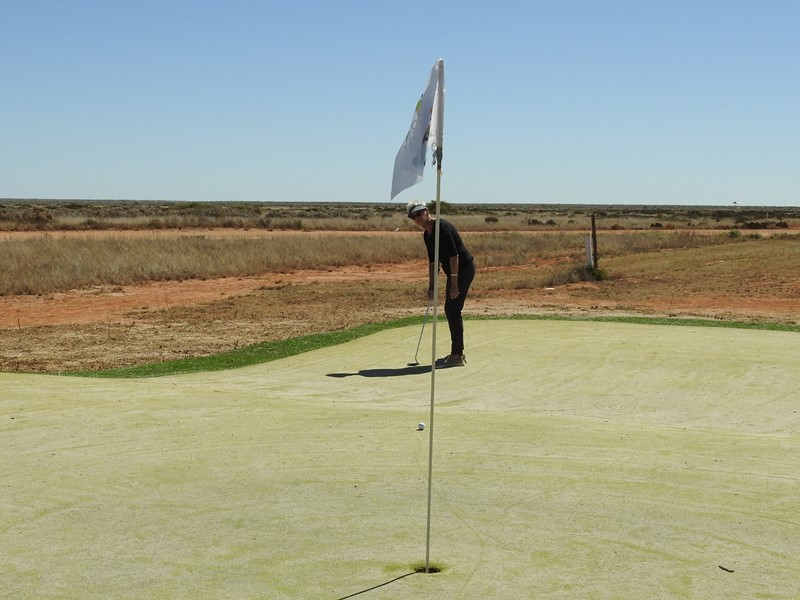 The Nullarbor Roadhouse Link is a Par 5 x 538 m link. My drive ended off the dirt fairway into the long grass. Besides having trouble finding my ball, I also had trouble getting back onto the fairway. So my approach to the green was from ‘left field’ and upon reaching the synthetic green it was undulating. Nonetheless very enjoyable and impressed upon me the importance of hiting the ball sweetly / nice and straight. The Nullarbor link is 297 Km west of Ceduna. The roadhouse is like the rest of the roadhouses along the Nullarbor, a service point for the traveller with a hotel/motel, caravan park, roadhouse and its golf link. It has some spectacular viewing areas from the head of the Bight to Wilson’s Bluff with cliffs that drop vertically some 90 m into the Southern ocean below.

At Nullarbor you have reached the treeless plain. There are some ‘scenic flights’ available and lovely viewing areas. 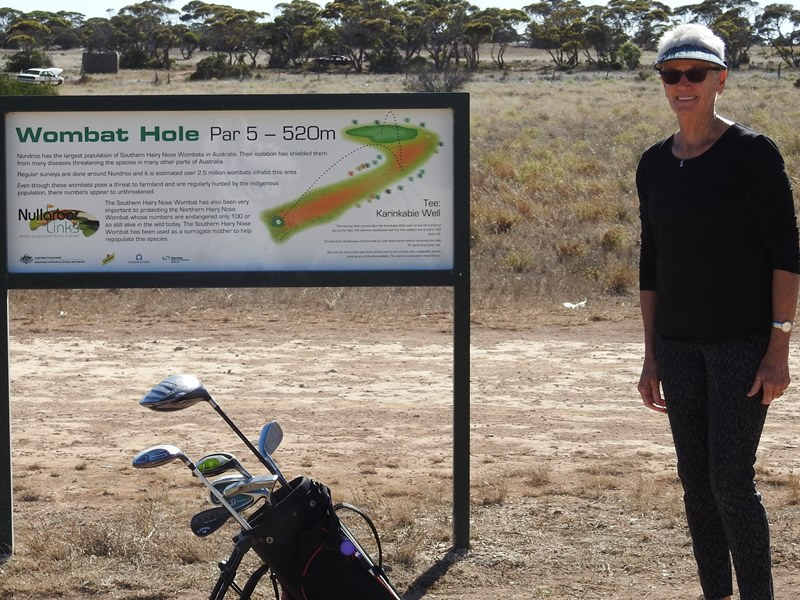 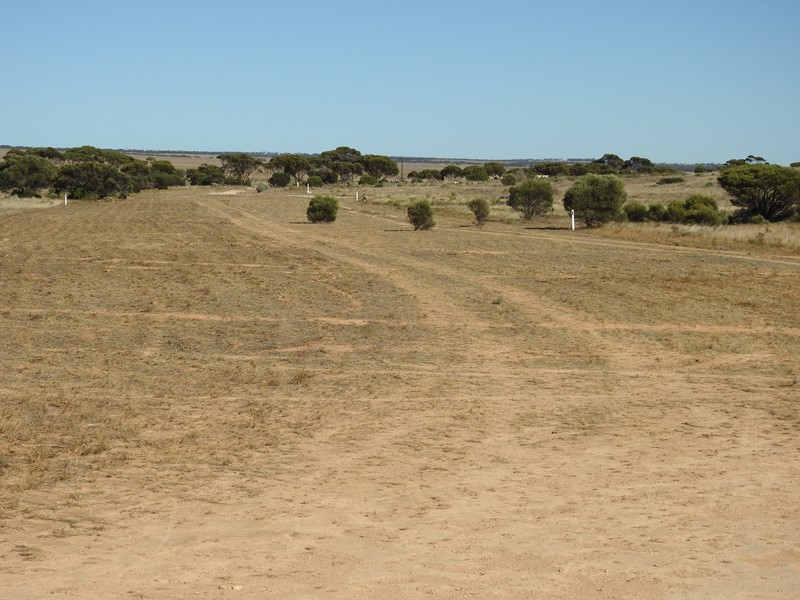 The Nundroo Link is a Par 5 x 520 m dog-leg link. An enjoyable link. Nundroo is on the western edge of South Australia’s agricultural land with its old settlers cottages and wilderness fishing on the Great Australian Bight. It is 152 Km west of Ceduna, a  service point for the traveller with a hotel/motel, caravan park, roadhouse and its golf link. 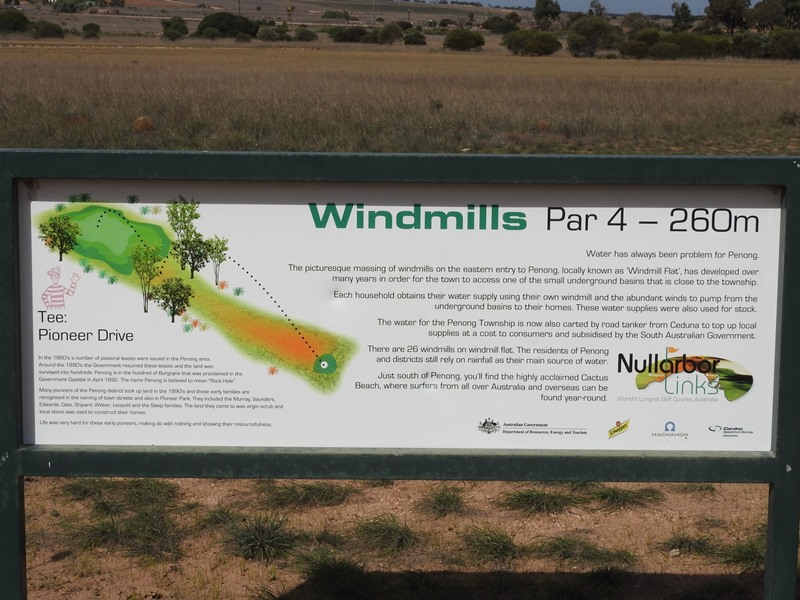 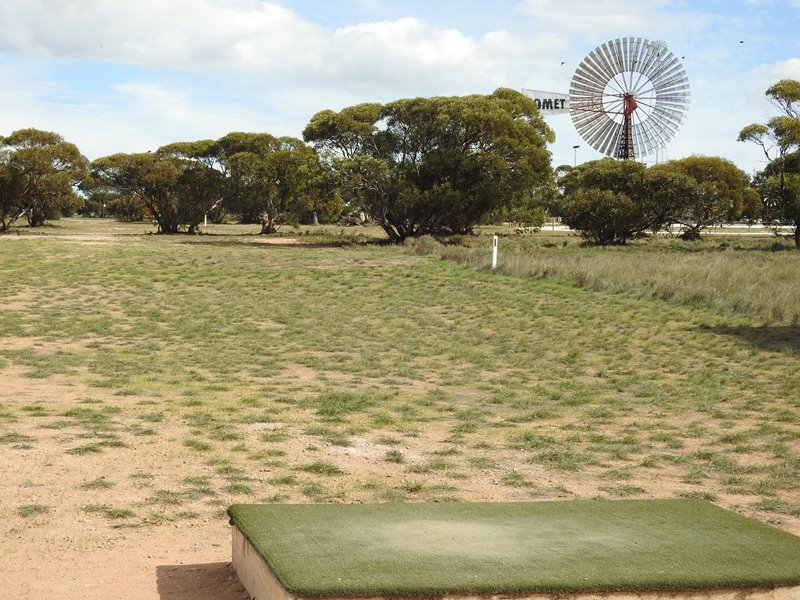 The Penong Link is a lovely Par 4 provided you don’t slice or hook your shot. If you do you will be struggling for a par.

Penong is situated 71 Km west of Ceduna on the Eyre Highway. This small town is known as “the town with 100 windmills”.

Located 21 kms south of Penong is Cactus beach, noted for its world famous surfing breaks and for fishing. 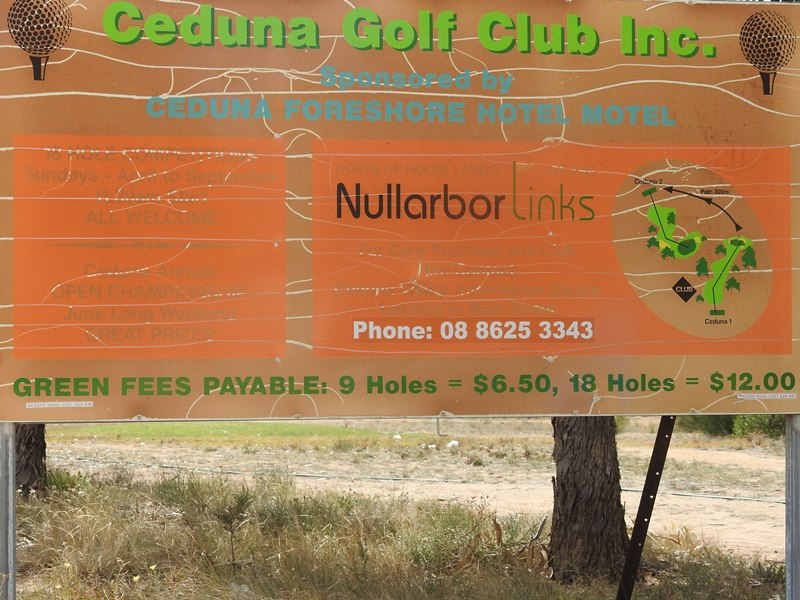 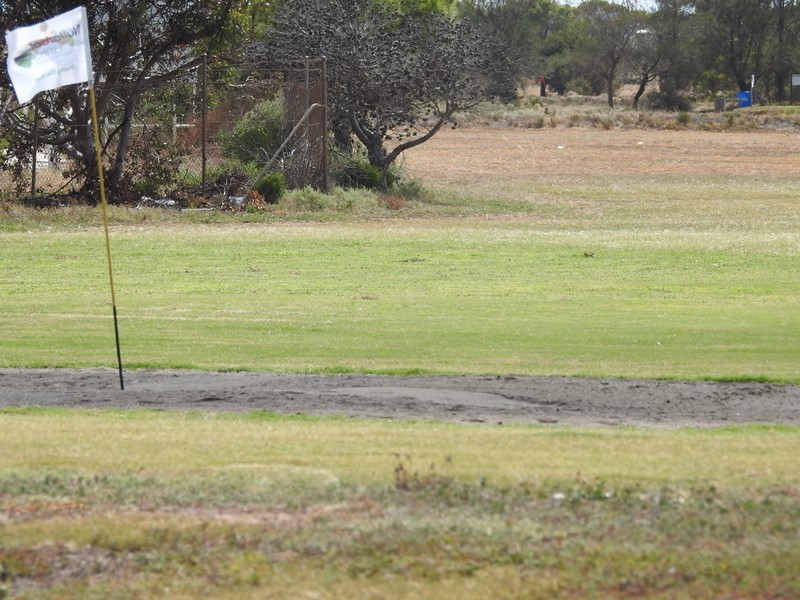 The Ceduna Golf course  has two of its 18 holes dedicated to the Nullarbor Links. Hole 1 ‘Oyster Beds’ named after their oyster industry and hole 2 named ‘Denial Bay’ which was the first settlement and port in the area.

The Ceduna course is semi-grassed for the 18 holes. The fairways are couch grass from around the sand traps to approximately 100 to 150 metres down the fairway. The course is Par 72. It is only an average length, with the Par fours being relatively short.